There is a high correlation between "programmer" and "gamer". One of the first Area 51 sites we launched, based on community demand, was gaming.stackexchange.com. Despite my fundamental skepticism about gaming as a Q&A topic -- as expressed on episode 87 of Herding Code -- I have to admit it has far exceeded my expectations.

But then maybe I shouldn't be so surprised. I've talked about the relationship between gamer and programmer before:

I used to recommend games on this very blog that I particularly enjoyed and felt were worthy of everyone's attention. I don't do this a lot any more, now that my blogging schedule has slipped to one post a week, if I'm lucky. (If you're wondering why, it's because running your own business is crazy stupid amounts of work when you turn it up to eleven.) Here are a few games I've recommended in the past:

I haven't had a ton of time to play games, other than the inevitable Rock Band 3, but I've been consumed by another game I had no idea would become so addictive -- Just Cause 2. 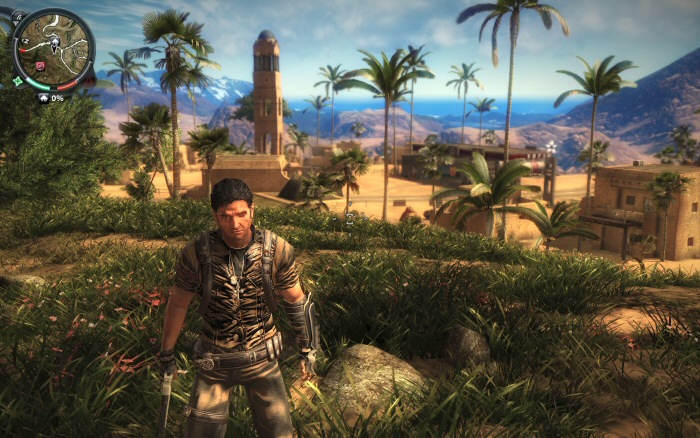 It's what you might call an open world sandbox game, in the vein of the Grand Theft Autos. But I could never get into the GTA games, even after trying GTA 3 and its sequels Vice City and San Andreas. They just left me cold, somehow.

Where GTA and its ilk often felt a tad too much like work for my tastes, Just Cause 2 is almost the opposite -- it is non-stop, full blown open world pandemonium from start to finish. One of the game's explicit goals is that you advance the plot by blowing stuff up. No, seriously. I'm not kidding. You have an entire 1000+ square kilometer island paradise at your disposal, filled with cities and military bases, spanning the range from snowy mountains to deserts to idyllic beaches -- all just waiting for you to turn them into "chaos points" … by any means necessary. 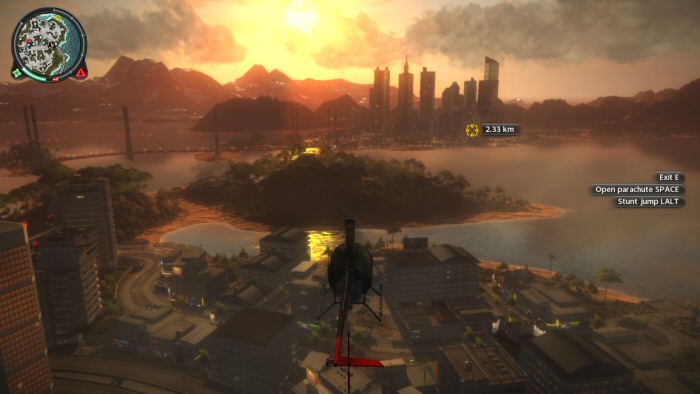 Of course, you get around by hijacking whatever vehicles happen by, be they boats, airplanes, jumbo jets, cars, tanks, trucks, buses, monster trucks, motorcycles, scooters, tractors or anything in between. Even on foot it is fun to navigate the island of Panau, because the developers gave us an impossibly powerful personal zipline that you can fire at any object in the game to propel yourself toward it. Combine that with the magical parachute you can deploy anywhere, anytime, and they make for some fascinating diversions (parasailing anyone?). You can also use the zipline to attach any two objects together. Think about that for a second. Have you ever wondered what happens when you zipline a moving vehicle to a tree? Or a pedestrian? Or another vehicle? Hmm. As a result, simply going walkabout on the island is more fun than I ever would have imagined.

Between the 49 plot missions, 9 stronghold takeovers, 104 unique vehicles, the optional boat/plane/car/parachute race missions,the opportunities for insane stunt points, the umpteen zillion upgrade crates and faction objects to collect, and the 360+ locations in the 1000+ square kilometers of Panau -- there's always something interesting happening around every corner. And whatever it is, it's probably beautiful and blows up real good. 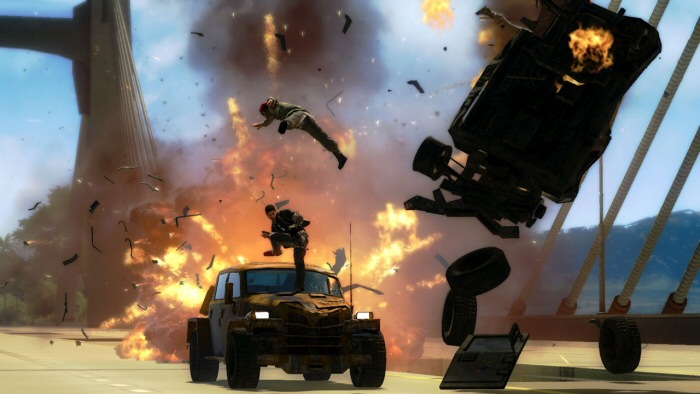 In short, Just Cause 2 is deliriously, stupidly, absurdly entertaining. I can't even remember the last game I completed where I felt compelled to go back after finishing the main storyline to discover even more areas I missed during my initial playthrough and get (most of) the in-game achievements. Whatever amount of time you have to play, Just Cause 2 will happily fill it with totally unscripted, awesome open world pandemonium.

Don't take my word for it; even the notoriously acidic game reviewer Yahtzee had almost nothing negative to say about Just Cause 2, which is his version of a positive review. And Metacritic gives Just Cause 2 a solid 84. Not that it can't be improved, of course; after such a sublime sandbox experience, I'm desperately curious to see what they'll add for Just Cause 3.

Luckily for you, the game has been out long enough that it can be picked up for a song on PS3, Xbox, or PC. Steam has Just Cause 2 on sale right now in an 8 player pack for $60, and Amazon has all versions in stock for under $30. Beware, though, as the PC version does require a pretty solid video card along with Windows Vista or newer -- but the upside is that I have mine cranked up to 2048x1152 with almost all the options on, and it rarely dips below 60 fps.

I spent my holidays on the beautiful island of Panau, and I don't regret a second of it. If you're looking for a vacation spot, I heartily recommend the open world sandbox of Panau. But while you're visiting, do be mindful of any errant gunfire, vehicles, and explosions.