In The Programming Aphorisms of Strunk and White, James Devlin does a typically excellent job of examining something I've been noticing myself over the last five years:

The unexpected relationship between writing code and writing.

There is perhaps no greater single reference on the topic of writing than Strunk and White's The Elements of Style. It's one of those essential books you discover in high school or college, and then spend the rest of your life wondering why other textbooks waste your time with all those unnecessary words to get their point across. Like all truly great books, it permanently changes the way you view the world, just a little.

Wikipedia provides a bit of history and context for this timeless book:

[The Elements of Style] was originally written in 1918 and privately published by Cornell University professor William Strunk, Jr., and was first revised with the help of Edward A. Tenney in 1935. In 1957, it came to the attention of E. B. White at The New Yorker. White had studied under Strunk in 1919 but had since forgotten the "little book" which he called a "forty-three-page summation of the case for cleanliness, accuracy, and brevity in the use of English." 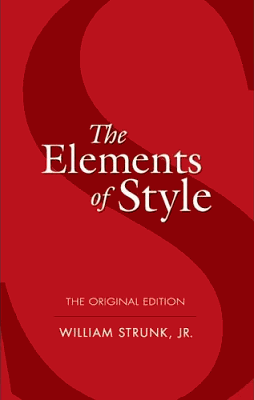 A few weeks later, White wrote a piece for The New Yorker lauding Professor Strunk and his devotion to "lucid" English prose. The book's author having died in 1946, Macmillan and Company commissioned White to recast a new edition of The Elements of Style, published in 1959. In this revision, White independently expanded and modernized the 1918 work, creating the handbook now known to millions of writers and students as, simply, "Strunk and White". White's first edition sold some two million copies, with total sales of three editions surpassing ten million copies over a span of four decades.

This is all well and good if you plan to become a writer, but what's the connection between this timeless little book and writing a computer program?

Writing programs that the computer can understand is challenging, to be sure. That's why so few people, in the big scheme of things, become competent programmers. But writing paragraphs and sentences that your fellow humans can understand -- well, that's even more difficult. The longer you write programs and the older you get, eventually you come to realize that in order to truly succeed, you have to write programs that can be understood by both the computer and your fellow programmers.

Of all the cruel tricks in software engineering, this has to be the cruelest. Most of us entered this field because the machines are so much more logical than people. And yet, even when you're writing code explicitly intended for the machine, you're still writing. For other people. Fallible, flawed, distracted human beings just like you. And that's the truly difficult part.

I think that's what Knuth was getting at with his concept of Literate Programming (pdf).

Let us change our traditional attitude to the construction of programs: Instead of imagining that our main task is to instruct a computer what to do, let us concentrate rather on explaining to human beings what we want a computer to do.

The practitioner of literate programming can be regarded as an essayist, whose main concern is with exposition and excellence of style. Such an author, with thesaurus in hand, chooses the names of variables carefully and explains what each variable means. He or she strives for a program that is comprehensible because its concepts have been introduced in an order that is best for human understanding, using a mixture of formal and informal methods that reinforce each other.

This is, of course, much easier said than done. Most of us spend our entire lives learning how to write effectively. A book like The Elements of Style can provide helpful guideposts that translate almost wholesale to the process of coding. I want to highlight the one rule from Elements of Style that I keep coming back to, over and over, since originally discovering the book so many years ago.

Vigorous writing is concise. A sentence should contain no unnecessary words, a paragraph no unnecessary sentences, for the same reason that a drawing should have no unnecessary lines and a machine no unnecessary parts. This requires not that the writer make all his sentences short, or that he avoid all detail and treat his subjects only in outline, but that every word tell.

What does this say to you about your writing? About your code?

Coding, after all, is just writing. How hard can it be?