Guitar Hero: Are You Ready to ROCK?

Although I'm a big fan of rhythm games, I had no idea Guitar Hero was coming out until I saw the glowing GameSpot review:

And here you thought that the rhythm game genre was getting stale. While Konami still has a firm lock on most rhythm-oriented games [primarily Dance Dance Revolution], another company called Harmonix has also released its share of interesting rhythm games--Frequency and Amplitude--both for the PlayStation 2. Plus, Harmonix and Konami have teamed up in the past on the Karaoke Revolution series. Now, the Cambridge-based developer is taking a similar approach to the world of guitar rock with Red Octane's Guitar Hero. With its extremely smart approach to difficulty, its great guitar controller, and its killer song selection, Guitar Hero might just be the best rhythm game ever made.

I just had to have Guitar Hero. You can buy it online directly from Red Octane, but luckily, our local Best Buy had exactly one copy in stock: 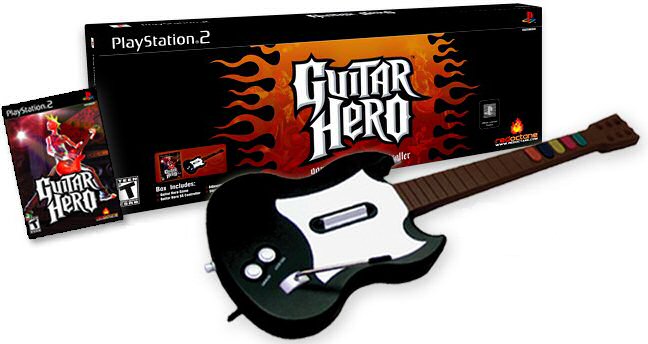 The gameplay is similar to many other rhythm games: it consists of pressing the right colored fret and strumming/holding the notes at the right time. But there's one big difference between other rhythm games and Guitar Hero: this one goes to eleven. The guitar even has a functional whammy bar and detects when it's being held vertically to enter "Rock Star" powerup mode. 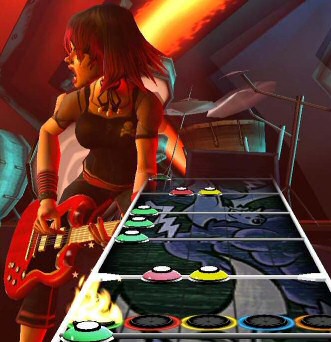 At the end of the day on Friday, we set the Playstation 2 up in the Vertigo conference room with the giant projection screen and Dolby Digital surround system. The game has a fantastic soundtrack. We rocked out for hours to tunes like You Got Another Thing Comin', Ziggy Stardust, I Wanna Be Sedated, Killer Queen, and More Than a Feeling.

I got blisters on me fingers! Needless to say, highly recommended. If you're still on the fence, watch the GameSpot video review of Guitar Hero or the official trailer.

One of the game's producers maintains a great blog documenting what happens behind the scenes to bring a game like this to market:

Back when I worked at Activision a good friend and I were talking about what we really wanted to accomplish in this industry. He talked about back when we were little kids and we would tell others on the playground about the latest game and what we were into. I remember when SF2 first came out and all of my friends were talking about it during the day and heading out nightly to the local 7-11's just to dig into the gameplay. That's when there were nothing but rumors on how to even do the moves of the different characters. It was really great. My hope for Guitar Hero is that it causes some a similar fever among youth where they'll just be talking about hammer on's, pull offs and classic rock from before they were born.

We were at IGN Live this last weekend and there were so many kids there in our booth. All of the stereotypes were represented but the ones that I really noticed were the Emo kids. There was a particular hoodied pair that were completely emotionless and looked about 12 years old. One of them played Fat Lip twice and was looking at it for the third time when I asked "why Fat Lip again?" He mentioned that it was like the only song he knew on the list. I said "play more than a feeling" and he choose that song. I turned to chuckle with my co-worker at the blatant irony of the Emo kid playing more than a feeling. Afterwards he said to me in the most emotionless tone "man this is fun..."

I think personally, where I'm coming from, I want people out there to get turned on to music through video games. More than any particular peripheral, I'd love for the music game to be commercially viable project. I'm kind of waiting for DDR to happen on a much larger scale. Where all of a sudden there's beat matching games that really feature music as a central part of the game. Peripherals are interesting and great but for me, it's all about the music. Everything else is an avenue to get there. I don't think clarinet hero would be the next big thing. If that's what it took, I'd be at the front of the line wanting to make the game. Personally I'm psyched about Guitar Hero because I think it's this totally accessible thing. We have an instrument that people fantasize about playing. Everyone fantasizes about being a full-on rock star. I think this game hopefully will get out there and touch people and get them to realize music is fun and accessible.

The producers and various reps also make frequent appearances to answer questions on the Guitar Hero forums. Now if you'll excuse me, I need to go practice Bark at the Moon just one more time.

Which Online Discussion Archetype Are You?