The PC is Over

The PC is over. It will linger, but increasingly as a relic.

The value in the desktop web is increasingly an illusion. Given the rate at which these mobile devices are improving, a plunge is rapidly approaching.

Don’t build an app based on your website. Build the app that acts as if websites never existed in the first place. Build the app for the person who has never used a desktop computer. Because they’re coming. Soon.

Realize that MG Siegler is a journalist, and a TechCrunch air-quotes journalist at that, so he's well versed in hyperbole. You might say he's a billion times better at hyperbole than the average blogger. In his own way, he is a creator, I suppose: he creates hype.

But he's not entirely wrong here.

I've noticed the same pattern in my own computing habits. As I wrote in The Last PC Laptop, it's becoming more and more difficult to justify any situation where a traditional laptop is your best choice – even a modern, svelte, fancypants laptop.

Desktops, on the other hand, are perfectly justifiable. That is, if you want three monitors, eight blazingly fast CPU cores, 64 GB of memory, and fire-breathing multi-GPU configurations. If you need absurd, obscene amounts of power, a desktop computer is the way to go. And it's probably cheaper than you think, because desktops are all built from the same interchangeable pool of parts. It's also a lot more fun than laptops, because willingness to tinker combined with lust for ostentatious power is the essence of hot rodding.

And it is freakin' awesome. 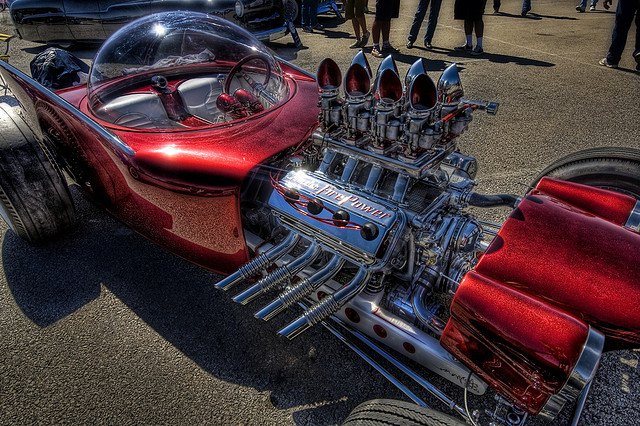 But even as an inveterate PC hot-rodder, I've noticed that in the last few years I've started to lose interest in the upgrade treadmill of ever faster CPUs with more cores, more sophisticated GPUs, more bandwidth, more gigabytes of RAM. Other than solid state drives, which gave us a badly needed order of magnitude improvement in disk speeds, when was the last time you felt you needed to upgrade a powerful desktop or laptop computer? If I dropped a SSD in it, do you honestly think you could tell the difference in real world non-gaming desktop usage between a high end 2009 personal computer and one from today?

Because I'm not sure I could.

Imagine the despair of a hot-rodder who regularly sees the streets awash in boring Chrysler K-Cars and Plymouth minivans with more ponies under the hood than a sweet custom rig he built just two years ago.

I think we're way past the point of satisfying the computing performance needs of the typical user. I'd say we hit that around the time dual CPU cores became mainstream, perhaps 2008 or so. What do you do when you have all the computing performance anyone could ever possibly need, except for the freakish one-percenters, the video editors and programmers? Once you have "enough" computing power, for whatever value of "enough" we can agree to disagree on, the future of computing is, and always has been, to make the computers smaller and cheaper. This is not some new trend that MG Siegler revealed unto the world from his journalistic fortress of solitude.

I mentioned how boring the performance scene has gotten for laptops and desktops. It's so boring that I can't be bothered to dig up representative benchmarks. Let's just assume that, outside of SSDs, there have been at best cost-of-living inflation type improvements in desktop and laptop benchmarks since 2008. Now contrast that with the hyperbolic performance improvement in the iPhone since 2008: 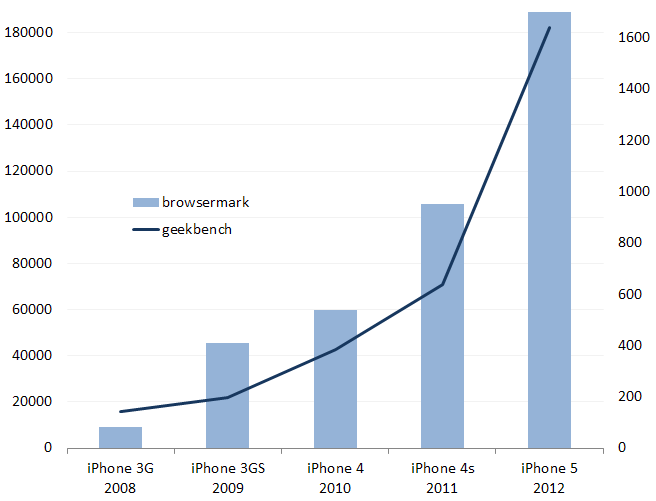 In case the graph didn't make it clear, in the last four years of iPhone, we've seen a factor of 20 improvement in Browsermark and a factor of four improvement in GeekBench. In the smartphone world, performance is – in the worst case – almost doubling every year.

Ironically enough, these results were printed in PC magazine. I'd like to draw your attention to two little letters in the title of said magazine. The first one is Pee, and the second one is Cee. That's right, PC Magazine is now in the business of printing the kind of smartphone performance benchmarks that are enough to make any hotrodder drool. What does that have to do with PCs? Well, it has everything to do with PCs, actually.

I have an iPhone 5, and I can personally attest that it is crazy faster than the old iPhone 4 I upgraded from. Once you add in 4G, LTE, and 5 GHz WiFi support, it's so fast that – except for the obvious size limitations of a smaller screen – I find myself not caring that much if I get the "mobile" version of websites any more. Even before the speed, I noticed the dramatically improved display. AnandTech says that if the iPhone 5 display was a desktop monitor, it would be the best one they had ever tested. Our phones are now so damn fast and capable as personal computers that I'm starting to wonder why I don't just use the thing I always have in my pocket as my "laptop", plugging it into a keyboard and display as necessary.

So maybe MG Siegler is right. The PC is over … at least in the form that we knew it. We no longer need giant honking laptop and desktop form factors for computers any more than we need entire rooms and floors of a building to house mainframes and minicomputers.

Somebody is to Blame for This