Why You Don't Want an iPhone -- Yet

Let me start by saying up front that I am a fan of the iPhone.

The mobile phone market is a sad, pathetic wasteland in desperate need of improvement. I'm hoping iPhone will the collective kick in the pants the smartphone market needs to finally stop making user hostile products.

But before you rush out this Friday, June 29th to be an early adopter and buy a shiny new iPhone, I have a cautionary tale for you. 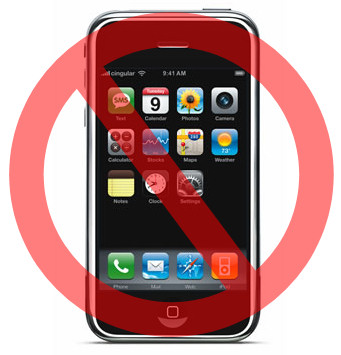 My work generously provides me with a Samsung Blackjack smartphone. I wasn't thrilled about the idea of owning a smartphone. My mobile phone needs are modest, and I thought the Windows Mobile 5.0 based Blackjack would be overkill for what I do. But I was pleasantly surprised. The hardware is wonderful; smartphone design has really come into its own in the latest generation. The software, well... not so much. Windows Mobile 5.0 has a huge number of rough edges, real head-slapping "what were they thinking" moments. You'd think they would have figured this mobile stuff out by now, after five full versions. But Windows Mobile is servicable, if not great. And I found two specific features incredibly addictive:

It's gotten to the point now where I get the shakes if I can't bust out my Blackjack and look up something on Wikipedia, any time, any place. It's like having the sum of the entire world's knowledge in the palm of your hand, wherever you happen to be. I can't overstate how powerful this is. It completely and utterly spoils you.

A lot of the fancy things Apple is showing in the iPhone ads I was already doing with the Blackjack. For example, when I was on vacation in Chicago recently, this scenario played out:

Could I have done all this more smoothly on the iPhone? I'm sure of it. The Windows Mobile web browser is pretty crappy, and unlikely to render websites that aren't at least a little mobile frendly. It's hardly Safari. But still, we got into that 8pm Second City show on standby, thanks to my phone and judicious use of the internet. It's no "calamari", but it'll do, pig. It'll do.

The Blackjack supports both 3G and EDGE data connections. 3G data connections are amazing. When you're connected via that little "3G" icon in the upper-right hand corner of your mobile phone screen, it's like a beautiful, golden river of bytes flowing into your cell phone. Web sites blast on to your mobile screen. 3G is darn near a cable modem experience. It makes using the internet on the go an absolute pleasure.

EDGE data connections, on the other hand, are none of those things. When my Samsung Blackjack is using an EDGE connection, it's like downloading the internet through an overclocked dialup modem. It's, in a word, unbelievably painful. It's the difference between "hey, let me whip out my phone and look this up really quick on wikipedia" and "eh, isn't worth the time investment." For reference, when downloading files, I see data rates of around 10 kb/sec with EDGE, and easily five times that (or more!) with 3G. Every time I see my phone displaying that little "E" icon that denotes an EDGE connection, I frown. It's a warning sign that using the internet will now be an unsatisfying, tedious, dialup era chore, instead of the fun, tiny-little-cable-modem experience it could be with 3G.

If you think reliance on WiFi is an advantage of the iPhone, check your reality distortion field. I've lived the WiFi lifestyle when I've travelled, and it's not pleasant. Free, public WiFi points are a dying breed. Most WiFi points these days are locked down tight with passwords and encryption. And if they're not locked down, they want to charge you exorbitant rates for a few measly hours of WiFi access. It's like this at every single airport I've been at in the last year. And every Starbucks. And pretty much every other commercial venue. The only places I've had luck at are smaller non-chain coffee shops, public libraries, and so forth. If you're counting on the availability of free WiFi for reasonable data speeds on your iPhone, you're in for a rude awakening.

I've found that not being tied down to WiFi access is an incredible blessing when I travel. One of my favorite features of Windows Mobile is that you can tether via USB and use it as a cellular modem for your PC. The 3G cellular data network frees me from dependency on expensive, unreliable, hard to find WiFi hotspots. It's saved me at least fifty bucks on WiFi access fees in the last two months alone-- and I could do it from anywhere I had cell coverage, not just in a small hotspot huddled around the altar of WiFi.

I'm no Walt Mossberg. It's not my goal to crush anyone's dreams of owning their first iPhone. I know you've heard this a million times, but never, never has it been more true for any technology product: wait for version 2.0 before buying.

Consider the fate of the original iPod, which was a far less ambitious product. This isn't just yet another small hard drive strapped to a tiny LCD display-- it's Apple's first cell phone ever. Maybe you remember this choice Jobs quote:

"You keep on innovating, you keep on making better stuff," Jobs said, in response to a question from Williams about why a new iPod might seem outdated as soon as you take it out of the box. Then Jobs offered a bit of advice to consumers: "If you always want the latest and greatest, then you have to buy a new iPod at least once a year."

If we use history as our guide, we can expect that Apple will introduce a new iPhone within 12 months. It's likely to address the most glaring flaws with the original: it'll probably have 3G, more storage, longer battery life, and so on.

I'm all for competition. I'm even what you might call an early adopter. But I think buying the very first iPhone model is a terrible idea unless you're the type of person who has a $500/month discretionary fund set aside solely for gadgets. The lack of 3G alone should be enough for serious pause, as it's such an obvious, painful omission from a phone with such powerful internet capabilities. I know I'd rarely use my Blackjack to access the internet if I was limited to brutally slow EDGE connection speeds, and I fear the same of the iPhone.

That said, not all buying decisions have to be rational. It is fun to own the latest gadgets, and as gadgets go, there's no doubt that the iPhone is a doozy. If you're willing to live with the crippling WiFi and EDGE limitations, then have at it. But at least go in knowing what you're getting into. And mark your calendar, because you'll probably be upgrading to the second generation iPhone within 12 months.

The Three Faces of About Face

Learning, or, Learning How To Learn