What do you need to do today? Other than read this blog entry, I mean.

Lifehacker's Law: A new To-Do list app will be released every 24 hours.

At this point it's getting a little ridiculous; per Lifehacker's Law, you'd need a to-do app just to keep track of all the freaking to-do apps. 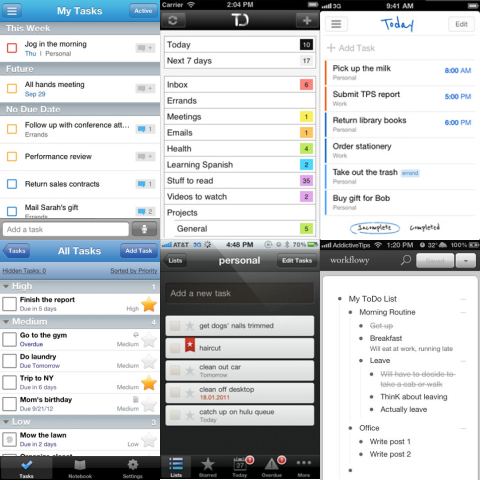 I've tried to maintain to-do lists at various points in my life. And I've always failed. Utterly and completely. Even turning it into a game, like the cleverly constructed Epic Win app, didn't work for me.

Eventually I realized that the problem wasn't me. All my to-do lists started out as innocuous tools to assist me in my life, but slowly transformed, each and every time, into thankless, soul-draining exercises in reductionism. My to-do list was killing me. Adam Wozniak nails it:

For the things in my life that actually mattered, I've never needed any to-do list to tell me to do them. If I did, then that'd be awfully strong evidence that I have some serious life problems to face before considering the rather trivial matter of which to-do lifehack fits my personality best. As for the things that didn't matter in my life, well, those just tended to pile up endlessly in the old to-do list. And the collective psychic weight of all these minor undone tasks were caught up in my ever-growing to-do katamari ball, where they continually weighed on me, day after day.

Yes, there's that everpresent giant to-do list, hanging right there over your head like a guillotine, growing sharper and heavier every day.

Like a crazy hoarder I mistake the root cause of my growing mountain of incomplete work. The hoarder thinks he has a storage problem when he really has a 'throwing things away problem'. I say I am 'time poor' as if the problem is that poor me is given only 24 hours in a day. It's more accurate to say… what exactly? It seems crazy for a crazy person to use his own crazy reasoning to diagnose his own crazy condition. Maybe I too easily add new projects to my list, or I am too reluctant to exit from unsuccessful projects. Perhaps I am too reluctant to let a task go, to ship what I've done. They're never perfect, never good enough.

And I know I'm not alone in making the easy claim that I am 'time poor'. So many people claim to be time poor, when really we are poor at prioritizing, or poor at decisiveness, or don't know how to say 'no' (…to other people, to our own ideas).

If only I had a hidden store of time, or if only I had magical organisation tools, or if only I could improve my productive throughput, then, only then would I be able to get things done, to consolidate the growing backlogs and todo lists into one clear line of work, and plough through it like an arctic ice breaker carving its way through a sheet of ice.

But are you using the right guillotine? Maybe it'd work better if you tried this newer, shinier guillotine? I'd like to offer you some advice:

Here's my challenge. If you can't wake up every day and, using your 100% original equipment God-given organic brain, come up with the three most important things you need to do that day – then you should seriously work on fixing that. I don't mean install another app, or read more productivity blogs and books. You have to figure out what's important to you and what motivates you; ask yourself why that stuff isn't gnawing at you enough to make you get it done. Fix that.

Tools will come and go, but your brain and your gut will be here with you for the rest of your life. Learn to trust them. And if you can't, do whatever it takes to train them until you can trust them. If it matters, if it really matters, you'll remember to do it. And if you don't, well, maybe you'll get to it one of these days. Or not. And that's cool too.

The PC is Over