Five Things You Didn't Know About Me (and my office)

I've been reluctant to respond to the Five Things You Didn't Know About Me meme. I generally take Kathy Sierra's advice when it comes to describing my background:

How many talks do you see where the speaker has multiple bullet points and slides just on their background? I did it once because I thought it would help people understand the context of my talk, and it did NOT go over well because:

And then there's Hugh MacLeod's take on the Five Things:

1. I dislike you intensely.
2. I love it when bad things happen to you.
3. When your name is mentioned I immediately try to change the subject.
4. I wouldn't read your blog if you paid me.
5. If we were trapped on a desert island together I would kill myself.

It's funny. But it's not really a response to the question. People have shared so generously with the Five Things post, and they've gone out of their way to express an interest in others by tagging them. It would be rude not to respond in kind with equal generosity. Although it's technically off topic, Five Things has made for strangely compelling reading.

I like to think that the important part of my blog is the content, not me. After all, users don't care about me. It's about what you, the reader, get out of this blog. I struggled with this for a while until I realized what I was missing. Blogs, for better or worse, are as much about the writer as they are any other topic. Personality is the essential ingredient that makes blogs so interesting, so compelling, so.. human. To avoid writing about yourself is just as much of a mistake as writing about yourself in every post. So Five Things isn't off topic at all. It's very much on topic. Behind every fascinating blog is a fascinating person.

With that in mind, I thought I'd offer a small pictorial tour of my office at Vertigo Software. It's as much a reflection of my personality as anything else in my life. 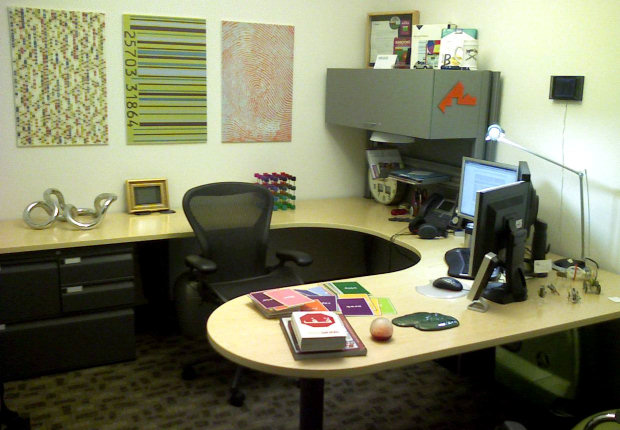 Here's the entrance to my office. As you can see, Vertigo does treat developers in accordance with the Programmer's Bill of Rights. The Aeron chair is standard issue to protect developers' second most important asset.

I also have iridescent thinking putty out permanently. I love putty. It's my absolute all time favorite desk tcotchke. And it's practical, too. As I noted last year, putty is legitimate exercise for your hand and your brain. I can't recommend it highly enough. I like it so much that I took it upon myself to buy every new Vertigo employee a tin of their very own thinking putty in a unique color. 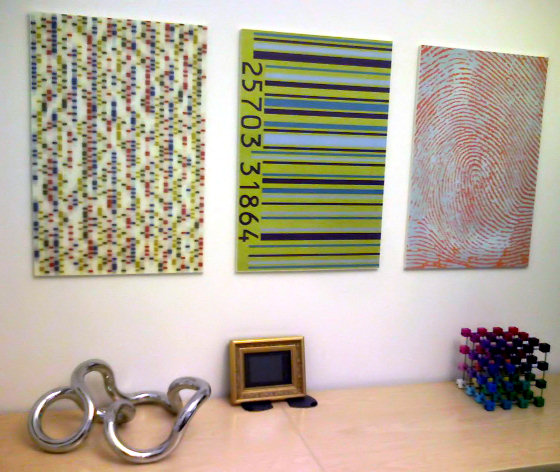 Here's a closeup of the back wall. The items on the wall aren't art, but wrapping paper from Knock Knock, the same company behind the flash cards. I spray-mounted them on foamcore backing for a drop-shadow effect and attached them with 3M's amazing Command picture mounting strips. I can't find a link to the wrapping paper on their site any more, so I'm not sure if they still sell it. But each one is a little inside joke:

Also on the table are some of my other favorite things: a three-dimensional color cube, a "museum size" chrome Tangle, and a cheap, generic digital picture frame that I mounted into a fancy gold leaf frame and matted with black construction paper. Trust me, the original frame was hideously ugly. I usually leave the picture frame running The Office (BBC) episodes 1 and 2 encoded into Xvid on a 512mb SD card. I also have Airplane! and Raising Arizona (among others) encoded in the same format, and I swap them out occasionally. I'm a big movie fan, so it's moving art to me. 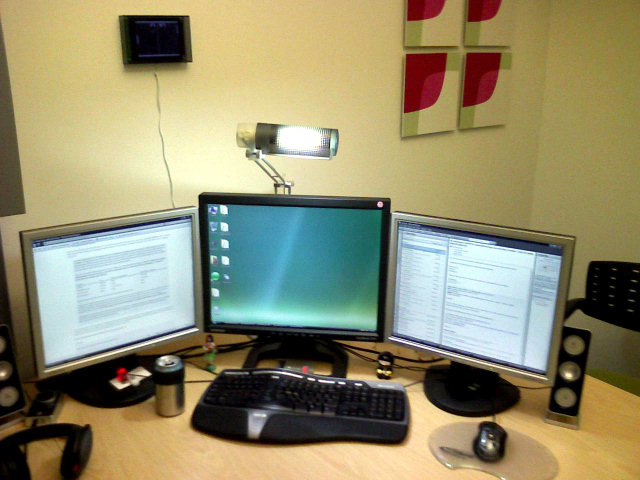 Here's my computer. I built it myself. You can see a glimpse of it in the first picture under my desk; it's a green Asus Vento. As I've mentioned many times before, I use three monitors at home and at work. The Logitech MX518 satisifies my mouse fetish, and the Microsoft Natural Keyboard 4000 is, as far as I'm concerned, the Keyboard of the Gods. It just doesn't get any better than that rich corinthian naugahyde under your palms. The speakers are mostly for show; you can see the Sennheiser Headphones I swear by on the left-hand side. 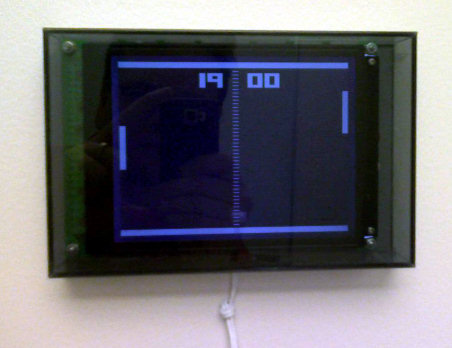 Directly above my monitors is my pride and joy: my very own Pong clock. I'm fascinated with clocks, so the Pong clock was my holy grail: it mixes art with classic video games, and it's a functional clock, too. I waited six months to get this delightful piece of art, and every day was worth it. Every minute the right side wins. Every hour the left side wins. Forever. 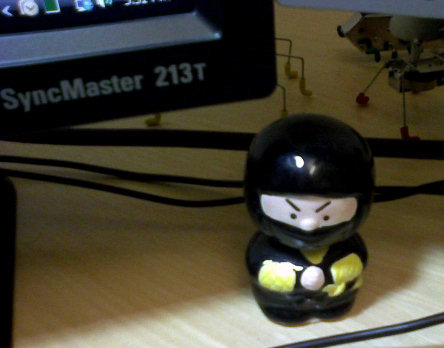 Here's a closeup of my bobblehead ninja. I can't stop thinking about ninjas. You can also see my small collection of Kikkerland windups in the background behind the monitors. It's fun to wind these things up and watch them grind around, to temporarily leave the digital world behind and revel in the purely analog. 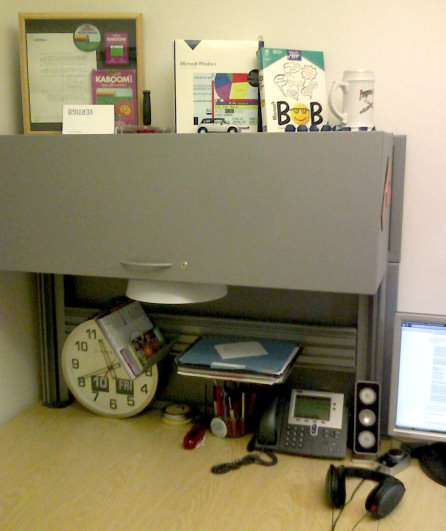 To my left and behind me, I have a few other items of interest. On the lower level, from left to right:

On the upper level, from left to right:

Here's a shot directly in front and to the left of my desk. I've always wanted a mobile in my office. This one is from flensted. It's always moving, and as far as I'm concerned, it's the next best thing to having a window overlooking the ocean. The art on the wall is cheap stuff from IKEA that caught my eye. My wife and I are huge IKEA fans. When we lived in North Carolina, the closest IKEA was in Baltimore, more than 5 hours away. Going there was a rare pleasure. Here in California, there's an IKEA barely 15 minutes away, so we can go any time we want. Life is sweet.

On the other wall, I have a standard-issue whiteboard, along with more inexpensive wall art from IKEA. Above the whiteboard is my BetaBrite LED sign. I use the .NET API I wrote for the BetaBrite to route the current weather conditions and top RSS news feeds to it.

And that concludes my office tour. But in the spirit of Five Things, I'll go even further. Here are five things you didn't know about me:

I'm tagging my Vertigo Software coworkers who blog in the hope that they'll share five things about themselves, too: Eric Cherng, Scott Stanfield, Alan Le, Dan Swearingen, and last but most of all least, Matt Hempey.

The Problem With C++