I was plenty excited when I saw Microsoft was releasing a new non-mangled ergonomic keyboard - the Microsoft Natural Ergonomic Keyboard 4000. 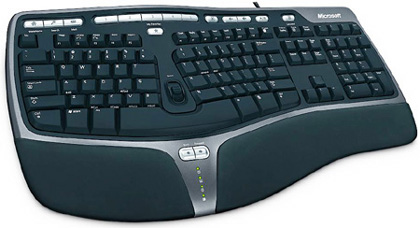 Now that I own one, I'm not excited any more.

This keyboard is the natural heir to the obsolete but much loved Microsoft Natural Keyboard Pro: 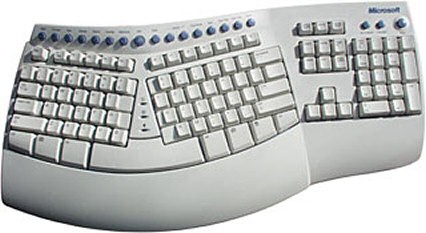 The MS Natural Pro was discontinued in early 2001. After that, there were hardly any ergonomic split keyboards with standard PgUp/PgDn clusters. There were a handful of rare and obscure exceptions, but in general, they just weren't being made any more. This was a dark time for ergo keyboard enthusiasts who happened to be programmers.

By 2004, people had started to mock my ugly-but-comfortable 1999-era Natural Pro. I had reluctantly switched to the Digital Media Pro after some flirtations with the Logitech Elite. But neither of these were ergonomic, and both had a very cheap feeling. They just didn't feel right to my hands and fingers.

I'm happy to report that the Natural Ergonomic 4000 is a truly worthy successor to the Natural Pro. My fingers feel at home again! Here are the highlights:

All is not perfect, however. I do have a few quibbles:

The keyboard comes with a pre-installed reverse slope tilt attachment, which supposedly offers a better neutral typing position. I may experiment with this later, but I removed it for now.

My keyboard quest is over. The Natural Ergonomic 4000 retains all the great qualities of the Natural Pro and significantly improves on it. I guess this means I can finally retire my stockpile of Natural Pros.

* It's like, how much more black could this be? and the answer is none. None more black.*