I seldom pause to answer criticism of my blog. If I did, I'd have time for little else in the course of the day, and no time for constructive work. But occasionally I'll encounter a particularly well written critique that gives me pause, such as Alastair Rankine's Blogging Horror. Since I feel that Alastair wrote it out of genuine good will, and that his criticisms are sincerely set forth, I want to try to answer his statement in what I hope will be patient and reasonable terms.

However, Coding Horror has become so popular that Atwood has quit his day job and struck out on his own. To my mind, this raises the bar somewhat. Professional bloggers deserve more scrutiny than dabblers, just as in many other fields.

Not only has Atwood has gone pro with his blog, but has recently started a venture called stackoverflow to collate accepted wisdom from the software development community. It is early days, but from what I can gather there is still likely to be Atwood's editorial hand in the output, despite intentions of adopting community generated content.

In other words, Atwood seems to be setting himself up as an authority figure on software development and, well, I have some issues with this.

I'd like to first answer this with two slides from my January CUSEC presentation, presented here verbatim with no modifications. 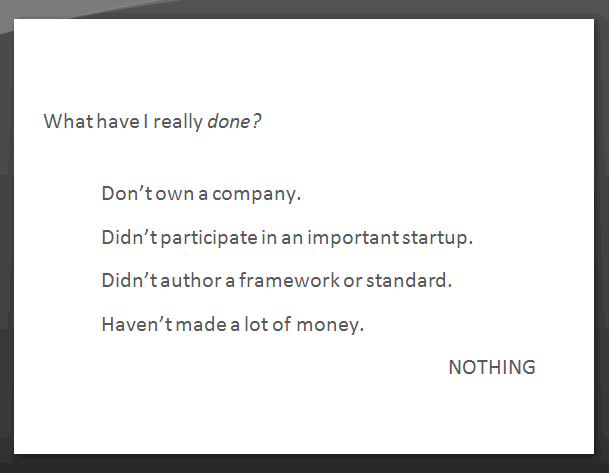 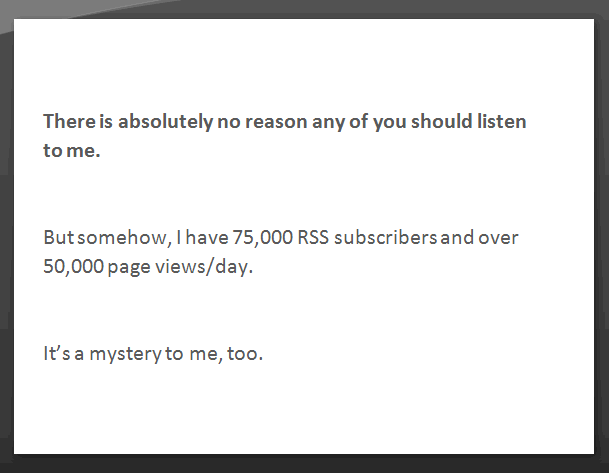 Authority in our field is a strange thing. Perceived authority is stranger still.

I've always thought of myself as nothing more than a rank amateur seeking enlightenment. This blog is my attempt to invite others along for the journey. It has become a rather popular journey along the way, which has subtly altered the nature of the journey and the way I approach it, but the goal remains the same.

It troubles me greatly to hear that people see me as an expert or an authority, and not a fellow amateur:

When I got back to Boston I went to the library and discovered a book by Kimura on the subject, and much to my disappointment, all of our "discoveries" were covered in the first few pages. When I called back and told Richard what I had found, he was elated. "Hey, we got it right!" he said. "Not bad for amateurs."

In retrospect I realize that in almost everything that we worked on together, we were both amateurs. In digital physics, neural networks, even parallel computing, we never really knew what we were doing. But the things that we studied were so new that no one else knew exactly what they were doing either. It was amateurs who made the progress.

These people are industry giants, so any comparison between them and myself is accidental. It's the overall point they're making that I want to call your attention to: software is an incredibly young discipline. Everything in software is so new and so frequently being reinvented that almost nobody really knows what they are doing. It is amateurs who make all the progress.

When it comes to software development, if you profess expertise, if you pitch yourself as an authority, you're either lying to us, or lying to yourself. In our heart of hearts, we know: the real progress is made by the amateurs. They're so busy living software they don't usually have time to pontificate at length about the breadth of their legendary expertise. If I've learned anything in my career, it is that approaching software development as an expert, as someone who has already discovered everything there is to know about a given topic, is the one surest way to fail.

Experts are, if anything, more suspect than the amateurs, because they're less honest. Regardless, you absolutely should question everything I write here, in the same way you question everything you've ever read online -- or anywhere else for that matter. Your own research and data should trump any claims you read from anyone, no matter how much of an authority or expert you, I, Google, or the general community at large may believe them to be.

But if, as Alastair correctly points out, I now derive a significant part of my income from blogging, doesn't that make me a professional blogger by definition? I thought Dave Winer had a great explanation that I'll gladly co-opt:

What Dave's describing here is the difference between a journalist writing about programmers versus a programmer writing about programming. Blogging does not mean observing from the outside; it means participation. I like to think what I do at Coding Horror is a byproduct of shipping software, not some sort of bizarre sociological experiment I'm conducting. Although sometimes, I'll admit, it does feel that way. I am a generalist with a decidedly lowbrow coding background, so I can be a little scatterbrained. But directly or indirectly, everything I've ever written on this blog is a side-effect of my deep, lifelong love of my ongoing work as a programmer.

You could argue that I'm a better writer than programmer. Perhaps that's true. I'll be the first to tell you that I am not an exceptional programmer. A competent programmer, yes. Always. On a good day, perhaps even a decent programmer. But I don't kid myself, either. I'll never be one of the best. But what I lack in talent, I make up in intensity.

Which means, mathematically speaking, I must be pretty damn intense.

The bite-sized morsels posted to Coding Horror are all very well for bite-sized topics. But things can often go awry if the topic is too complex to be distilled down easily. Oversimplification often ensues, as in the following examples, all recent:

Common to all of these are a superficial understanding of the topic at hand. In short, Atwood just isn't credible.

Maybe a little too intense, sometimes. It's almost like I'm trying to overcompensate for something, but I can't imagine what that could be.

I'm Rex, founder of the Rex Kwon Do self-defense system! After one week with me in my dojo, you'll be prepared to defend yourself with the STRENGTH of a grizzly, the reflexes of a PUMA, and the wisdom of a MAN.

Like Rex of Rex Kwon Do, perhaps I'm relying a bit too heavily on the "Smackdown" learning model here in my dojo. I use it because I personally find it incredibly effective, for all the reasons that Kathy Sierra outlines.

But I worry that for some, it's getting in the way, damaging the credibility of the underlying message. Instead of arriving at the desired learning part, all they're getting is the smackdown. I certainly hope my posts are read and understood as slightly more nuanced than "Everything About PHP Sucks", "Everything About XML Sucks", or my personal favorite, "Everything About (your favorite technology) Sucks. Seriously."

I suppose it's also an issue of personal style. To me, writing without a strong voice, writing filled with second guessing and disclaimers, is tedious and difficult to slog through. I go out of my way to write in a strong voice because it's more effective. But whenever I post in a strong voice, it is also an implied invitation to a discussion, a discussion where I often change my opinion and invariably learn a great deal about the topic at hand. I believe in the principle of strong opinions, weakly held:

A couple years ago, I was talking the Institute's Bob Johansen about wisdom, and he explained that – to deal with an uncertain future and still move forward – they advise people to have "strong opinions, which are weakly held." They've been giving this advice for years, and I understand that it was first developed by [former] Institute Director Paul Saffo. Bob explained that weak opinions are problematic because people aren't inspired to develop the best arguments possible for them, or to put forth the energy required to test them. Bob explained that it was just as important, however, to not be too attached to what you believe because, otherwise, it undermines your ability to "see" and "hear" evidence that clashes with your opinions. This is what psychologists sometimes call the problem of "confirmation bias."

So when you read one of my posts and hear this:

My name is Rex, and if you study with my eight-week program you will learn a system of self defense that I developed over two seasons of fighting in the Octagon. It's called... Rex Kwon Do!

Please consider it a strong opinion weakly held, a mock fight between fellow amateurs of equal stature, held in an Octagon where everyone retains their sense of humor, has an open mind, and enjoys a spirited debate where we all learn something.