One of the things we're thinking about while building stackoverflow.com is how to let users style the questions and answers they're entering on the site. Nothing's decided at this point, but we definitely won't be giving users one of those friendly-but-irritating HTML GUI browser layout controls.

I have one iron-clad design guide: this is a site for programmers, so they should be comfortable with basic markup. None of that nancy-boy GUI toolbar handholding nonsense for us, thankyouverymuch. If you can sling code, a little bit of presentation markup is child's play.

I mentioned in podcast #4 that we consider Wikipedia a defining influence. Let's see how Wikipedia handles markup syntax. This is what the edit page for Joel Spolsky's Wikipedia entry looks like: 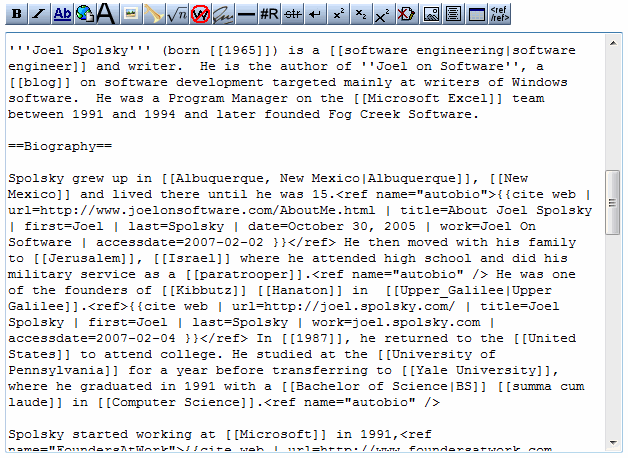 It's an effective markup language, but I think you'll agree that it's more intimidating than humane. Wikipedia's How to Edit a Page and the accompanying Wikipedia syntax cheatsheet helps. Some. I'd argue that writing a Wikipedia entry is a step beyond mere presentational markup; it's almost like coding, as you weave the article into the Wikipedia gestalt. (Incidentally, if you haven't ever edited a Wikipedia article, you should. I consider it a rite of passage, a sort of internet merit badge for anyone who is serious about their online presence.)

Let's consider a simpler example. What we're looking for is some kind of middle ground, a humane text format. Let's start with some basic HTML.

Here's what that looks like expressed in a variety of lightweight markup languages. Bear in mind that each of these will produce HTML equivalent to the above.

None of these lightweight markup languages are particularly difficult to understand -- and they're easy on the eyes, as promised. But I still had to look up the reference syntax for each one and map it to the HTML that I already know by heart. I also found them disturbingly close to "magic" for some of the formatting rules, to the point that I wished I could just write literal HTML and get exactly what I want without guessing how the parser is going to interpret my fake-plain-text.

Which leads directly to this question: why not just stick with what we already know and use HTML? This c2 wiki page titled Why Doesn't Wiki Do HTML? makes the case that -- at least for Wiki content -- you're better off leaving HTML behind:

I'm not sure I agree with all of this, but it can make sense in the context of a full-blown Wiki. It's worth considering.

I do think we'll adopt some of the cleverer functions of Textile and Markdown, insofar as they remove mundane HTML markup scutwork. But in general, I'd much rather rely on a subset of trusty old HTML than expend brain cells trying to remember the fake-HTML way to make something bold, or create a hyperlink. HTML isn't perfect, but it's an eminently reasonable humane markup language.

Cleaning Your Display and Keyboard