If I had to make a list of the top 10 things I've done in my life that I regret, "writing a book" would definitely be on it. I took on the book project mostly because it was an opportunity to work with a few friends whose company I enjoy. I had no illusions going in about the rapidly diminishing value of technical books in an era of pervasive high speed Internet access, and the book writing process only reinforced those feelings.

In short, do not write a book. You'll put in mountains of effort for precious little reward, tangible or intangible. In the end, all you will have to show for it is an out-of-print dead tree tombstone. The only people who will be impressed by that are the clueless and the irrelevant.

As I see it, for the kind of technical content we're talking about, the online world of bits completely trumps the offline world of atoms:

And here's the best part: you can always opt to create a print version of your online content, and instantly get the best of both worlds. But it only makes sense in that order. Writing a book may seem like a worthy goal, but your time will be better spent channeling the massive effort of a book into creating content online. Every weakness I listed above completely melts away if you redirect your effort away from dead trees and spend it on growing a living, breathing website presence online.

A few weeks ago, Hyperink approached me with a concept of packaging the more popular entries on Coding Horror, its "greatest hits" if you will, into an eBook. They seemed to have a good track record doing this with other established bloggers, and I figured it was time to finally practice what I've been preaching all these years. So you can now download Effective Programming: More Than Writing Code for an introductory price of $2.99. It's available in Kindle, iPad, Nook, and PDF formats. 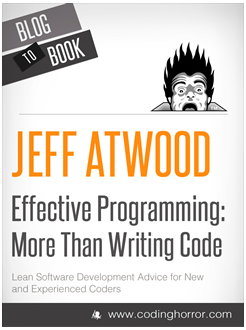 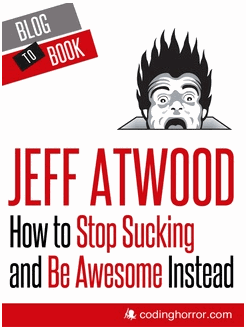 (As of March 2013, the first book was apparently popular enough to warrant a second volume, How to Stop Sucking and Be Awesome Instead)

I've written about the ongoing tension between bits and atoms recently, and I want to be clear: I am a fan of books. I'm just not necessarily a fan of writing them. I remain deeply cynical about current book publishing models, which feel fundamentally broken to me. No matter the price of the book, outside of J.K. Rowling, you're basically buying the author a drink.

As the author, you can expect to make about a dollar on every copy that sells. The publisher makes several times that, so they make a nice profit with as few as, say, five thousand copies sold. Books that sell ten or fifteen thousand are rare, and considered strong sellers. So let's say you strike gold. After working on your book for a year or more, are you going to be happy with a payday of ten to fifteen grand?

Incidentally, don't expect your royalty check right away. The publisher gets paid first, by the bookstores, and the publisher may then hold on to your money for several months before they part with any of it. Yes, this is legal: it's in the publisher's contract. Not getting paid may be a bummer for you, but it's a great deal for the publisher, since they make interest on the float (all the money they owe to their authors) - which is another profit stream. They'll claim one reason for the delay is the sheer administrative challenge of cutting a check within three months (so many authors to keep track of! so many payments!)... a less ridiculous reason is that they have to wait to see whether bookstores are going to return unsold copies of your book for a full refund.

Here's one real world example. John Resig sold 4,128 copies of Pro Javascript, for which he earned a grand total of $1.87 per book once you factor in his advance. This is a book which still sells for $29.54 on Amazon new.

Tellingly, John's second book seems permanently unfinished. It's been listed as "in progress" since 2008. Can't say I blame him. (Update: John explains.)

When I buy books, I want most of that money to go to the author, not the publishing middlemen. I'd like to see a world where books are distributed electronically for very little cost, and almost all the profits go directly to the author. I'm not optimistic this will happen any time soon.

I admire people willing to write books, but I honestly think you have to be a little bit crazy to sit down and pound out an entire book these days. I believe smaller units of work are more realistic for most folks. I had an epic email discussion with Scott Meyers about the merits of technical book publishing versus blogging in 2008, and I don't think either of us budged from our initial positions. But he did launch a blog to document some of his thoughts on the matter, which ended with this post:

My longer-term goal was to engage in a dialogue with people interested in the production of fast software systems such that I could do a better job with the content of [my upcoming book]. Doing that, however, requires that I write up reasonable initial blog posts to spur discussion, and I've found that this is not something I enjoy. To be honest, I view it as overhead. Given a choice between doing background research to learn more about a topic (typically reading something, but possibly also viewing a technical presentation, listening to a technical podcast, or exchanging email with a technical expert) or writing up a blog entry to open discussion, I find myself almost invariably doing the research. One reason for this is that I feel obliged to have done some research before I post, anyway, and I typically find that once I'm done with the research, writing something up as a standalone blog entry is an enterprise that consumes more time than I'm willing to give it. It's typically easier to write the result up in the form of a technical presentation, then give the presentation and get feedback that way.

Overhead? I find this attitude perplexing; the research step is indeed critical, but no less important than writing up your results as a coherent blog entry. If you can't explain the results of your research to others, in writing, in a way they can understand, you don't understand it. And if you aren't willing to publish your research in the form of a simple web page that anyone in the world can visit and potentially learn from, why did you bother doing that research in the first place? Are you really maximizing the value of your keystrokes?

More selfishly, you should always finish by writing up your results purely for your own self-improvement, if nothing else. As Steve Yegge once said: "I have many of my best ideas and insights while blogging." Then you can take all that published writing, fold in feedback and comments from the community, add some editorial embellishment on top, and voilà – you have a great book.

Of course, there's no getting around the fact that writing is just plain hard. Seth Godin's advice for authors still stands:

Lower your expectations. The happiest authors are the ones that don't expect much.

Which, I think, is also good life advice in general. Maybe the easiest way to lower your expectations as an author is by attempting to write one or two blog entries a week, keep going as long as you can, and see where that takes you.