Today is Goof Off at Work Day

When you're hired at Google, you only have to do the job you were hired for 80% of the time. The other 20% of the time, you can work on whatever you like – provided it advances Google in some way. At least, that's the theory.

Google's 20 percent time policy is well known in software engineering circles by now. What's not as well known is that this concept dates all the way back to 1948 at 3M.

In 1974, 3M scientist Art Fry came up with a clever invention. He thought if he could apply an adhesive (dreamed up by colleague Spencer Silver several years earlier) to the back of a piece of paper, he could create the perfect bookmark, one that kept place in his church hymnal. He called it the Post-It Note. Fry came up with the now iconic product (he talks to the Smithsonian about it here) during his "15 percent time," a program at 3M that allows employees to use a portion of their paid time to chase rainbows and hatch their own ideas. It might seem like a squishy employee benefit. But the time has actually produced many of the company's best-selling products and has set a precedent for some of the top technology companies of the day, like Google and Hewlett-Packard.

There's not much documentation on HP's version of this; when I do find mentions of it, it's always referred to as a "convention", not an explicit policy. Robert X. Cringely provides more detail:

Google didn’t invent that: HP did. And the way the process was instituted at HP was quite formal in that the 10 percent time was after lunch on Fridays. Imagine what it must have been like on Friday afternoons in Palo Alto with every engineer working on some wild-ass idea. And the other part of the system was that those engineers had access to what they called “lab stores” — anything needed to do the job, whether it was a microscope or a magnetron or a barrel of acetone could be taken without question on Friday afternoons from the HP warehouses. This enabled a flurry of innovation that produced some of HP’s greatest products including those printers.

Maybe HP did invent this, since they've been around since 1939. Dave Raggett, for example, apparently played a major role in inventing HTML on his 10% time at HP.

Although the concept predates Google, they've done more to validate it as an actual strategy and popularize it in tech circles than anyone else. Oddly enough, I can't find any mention of the 20% time benefit listed on the current Google jobs page, but it's an integral part of Google's culture. And for good reason: notable 20 percent projects include GMail, Google News, Google Talk, and AdSense. According to ex-employee Marissa Meyer, as many as half of Google's products originated from that 20% time.

At Hewlett-Packard, 3M, and Google, "many" of their best and most popular products come from the thin sliver of time they granted employees to work on whatever they wanted to. What does this mean? Should we all be goofing off more at work and experimenting with our own ideas? That's what the book The 20% Doctrine explores. 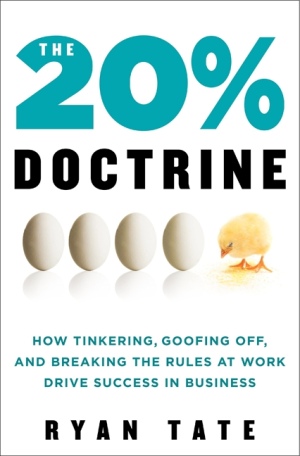 Closely related to 20% time is the Hack Day. Hack Days carve out a specific 24 hour timeframe from the schedule, encouraging large groups to come together to work collaboratively (or in friendly competition) during that period. Chad Dickerson instituted one of the first at Yahoo in 2005.

The Friday before, I had organized the first internal Hack Day at Yahoo! with the help of a loosely-organized band of people around the company. The “hack” designation for the day was a tip of the hat to hacker culture, but also a nod to the fact that we were trying to fix a system that didn’t work particularly well. The idea was really simple: all the engineers in our division were given the day off to build anything they wanted to build. The only rules were to build something in 24 hours and then show it at the end of the period. The basic structure of the event itself was inspired by what we had seen at small startups, but no one had attempted such an event at a large scale at an established company.

The first Yahoo! Hack Day was clearly a success. In a company that was struggling to innovate, about seventy prototypes appeared out of nowhere in a single 24-hour period and they were presented in a joyfully enthusiastic environment where people whooped and yelled and cheered. Sleep-deprived, t-shirt-clad developers stayed late at work on a Friday night to show prototypes they had built for no other reason than they wanted to build something. In his seminal book about open source software, The Cathedral and the Bazaar, Eric Raymond wrote: “Every good work of software starts by scratching a developer’s personal itch.” There clearly had been a lot of developer itching around Yahoo! but it took Hack Day to let them issue a collective cathartic scratch.

Far and away, the biggest problem was scheduling time for 20% work. As one person put it, “Getting 20% time is incredibly difficult amongst all the pressure to deliver new features and bug fixes.” Atlassian has frequent product releases, so it is very hard for teams to schedule ‘down time’. Small teams in particular found it hard to afford time away from core product development. This wasn’t due to Team Leaders being harsh. It was often due to developers not wanting to increase the workload on their peers while they did 20% work. They like the products they are developing and are proud of their efforts. However, they don’t want to be seen as enjoying a privilege while others carry the workload.

I think there's enough of a track record of documented success that it's worth lobbying for something like Hack Days or 20% time wherever you work. But before you do, consider if you and your company are ready:

Having some official acknowledgement that time spent working on whatever you think will make things better around these here parts is not just tolerated – but encouraged – might go a long way towards making work feel a lot less like work.