Are you familiar with this quote?

640K [of computer memory] ought to be enough for anybody. — Bill Gates

It's amusing, but Bill Gates never actually said that:

I've said some stupid things and some wrong things, but not that. No one involved in computers would ever say that a certain amount of memory is enough for all time … I keep bumping into that silly quotation attributed to me that says 640K of memory is enough. There's never a citation; the quotation just floats like a rumor, repeated again and again.

One of the few killer features of the otherwise unexciting Intel Core i7 platform upgrade* is the subtle fact that Core i7 chips use triple channel memory. That means three memory slots at a minimum, and in practice most Core i7 motherboards have six memory slots.

The price of DDR3 ram has declined to the point that populating all six slots of memory with 4 GB memory is, well, not cheap -- but quite attainable at $299 and declining.

(And if you don't have a Core i7 system, they're not expensive to build, either. You can pair an inexpensive motherboard with even the slowest and cheapest triple channel compatible i7-950, which is plenty speedy – and overclocks well, if you're into that. Throw in the 24 GB of ram, and it all adds up to about $800 total. Don't forget the power supply and CPU cooler, though.)

Remember when one gigabyte of system memory was considered a lot? For context, our first "real" Stack Overflow database server had 24 GB of memory. Now I have that much in my desktop … just because I can. Well, that's not entirely true, as we do work with some sizable databases while building the Stack Exchange network. 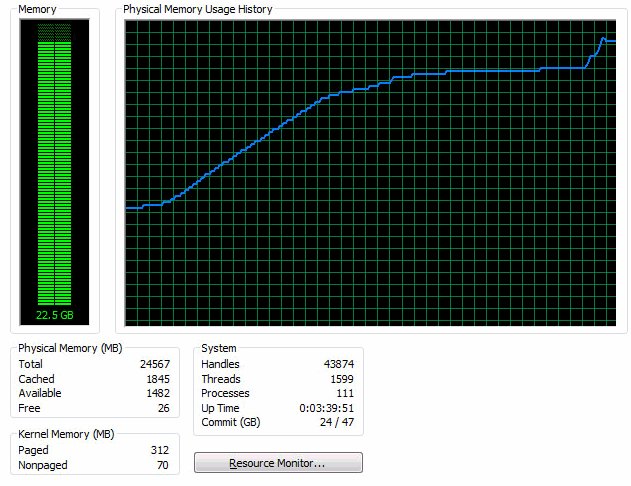 I guess having 24 gigabytes of system memory is a little extravagant, but at these prices -- why not? What's the harm in having obscene amounts of memory, making my system effectively future proof?

I have to say that in 1981, making those decisions, I felt like I was providing enough freedom for 10 years. That is, a move from 64k to 640k felt like something that would last a great deal of time. Well, it didn't – it took about only 6 years before people started to see that as a real problem. — Bill Gates

To me, it's more about no longer needing to think about memory as a scarce resource, something you allocate carefully and manage with great care. There's just .. lots. As Clay Shirky once related to me, via one of his college computer science professors:

Algorithms are for people who don't know how to buy RAM.

I mean, 24 GB of memory should be enough for anybody… right?

* it's only blah on the desktop; on the server the Nehalem architecture is indeed a monster and anyone running a server should upgrade to it, stat.