It's easy to forget just how crazy things got during the Web 1.0 bubble in 2000. That was over ten years ago. For context, Mark Zuckerberg was all of sixteen when the original web bubble popped.

There's plenty of evidence that we're entering another tech bubble. It's just less visible to people outside the tech industry because there's no corresponding stock market IPO frenzy. Yet.

There are two films which captured the hyperbole and excess of the original dot com bubble especially well. 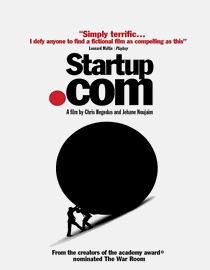 The first is the documentary Startup.com. It's about the prototypical web 1.0 company: one predicated on an idea that made absolutely no sense, which proceeded to flame out in a spectacular and all too typical way for the era. This one just happened to occur on digital film. The govworks.com website described in the documentary, the one that burned through $60 million in 18 months, is now one of those ubiquitous domain squatter pages. A sign of the times, perhaps.

The second film was one I had always wanted to see, but wasn't able to until a few days ago: Code Rush. For a very long time, Code Rush was almost impossible to find, but the activism of Andy Baio nudged the director to make the film available under Creative Commons. You can now watch it online — and you absolutely should.

Remember when people charged money for a web browser? That was Netscape.

Code Rush is a PBS documentary recorded at Netscape from 1998 - 1999, focusing on the open sourcing of the Netscape code. As the documentary makes painfully clear, this wasn't an act of strategy so much as an act of desperation. That's what happens when the company behind the world's most ubiquitous operating system decides a web browser should be a standard part of the operating system.

Everyone in the documentary knows they're doomed; in fact, the phrase "we're doomed" is a common refrain throughout the film. But despite the gallows humor and the dark tone, parts of it are oddly inspiring. These are engineers who are working heroic, impossible schedules for a goal they're not sure they can achieve — or that they'll even survive as an organization long enough to even finish.

The most vivid difference between Startup.com and Code Rush is that Netscape, despite all their other mistakes and missteps, didn't just burn through millions of dollars for no discernable reason. They produced a meaningful legacy:

Do you want money? Fame? Job security? Or do you want to change the world … eventually? Consider how many legendary hackers went on to brilliant careers from Netscape: Jamie Zawinski, Brendan Eich, Stuart Parmenter, Marc Andreeseen. The lessons of Netscape live on, even though the company doesn't. Code Rush is ultimately a meditation on the meaning of work as a programmer.

I'd like to think that when Facebook – the next Google and Microsoft rolled into one – goes public in early 2012, the markets will react rationally. More likely, people will all collectively lose their damn minds again and we'll be thrust into a newer, bigger, even more insane tech bubble than the first one.

Yes, you will have incredibly lucrative job offers in this bubble. That's the easy part. As Startup.com and Code Rush illustrate, the hard part is figuring out why you are working all those long hours. Consider carefully, lest the arc of your career mirror that of so many failed tech bubble companies: lived fast, died young, left a tired corpse.

How to Write Without Writing