I can't believe it's been almost two and a half years since I built my last PC. I originally documented that process in a series of posts:

Now, lest you think I am some kind of freakish, cave-dwelling luddite, what with my ancient two and a half year old PC, I have upgraded the CPU, upgraded the hard drive, and upgraded the video card since then. I also went from 4 GB of RAM to 8 GB of RAM, but I didn't happen to blog about that. Normal computers age in dog years -- every year they get seven years older -- but mine isn't so bad with all my upgrades! I swear!

Judge for yourself; here's a picture of it. 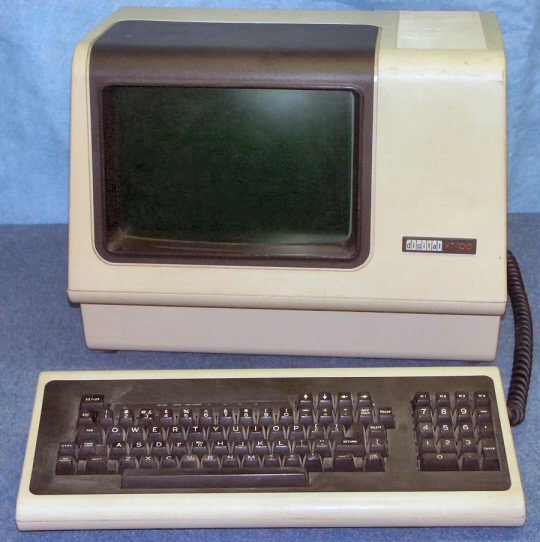 A big part of the value proposition of building your own PC is upgrading it in pieces and parts over time. When you're unafraid to pop the cover off and get your hands dirty with a little upgrading, you can spend a lot less to stay near the top of the performance heap over time. It's like the argument for buying a car versus renting it; the smart buyers keep the car for as long as possible to maximize the value of their investment. That's what we're doing here with our upgrades, and a rebuild is the ultimate upgrade.

In defense of my creaky old computer, the Core 2 series from Intel has been unusually strong over time, one of their best overall platforms in recent memory. It was almost good enough to banish the excerable Pentium 4 series from my mind. Man those were horrible! But the Core 2 series was a solid design with some serious legs; it and scaled brilliantly, from single to dual to quad core, and in frequency from 1 GHz to 3.5 GHz.

I was initially unimpressed with the new Core i7 architecture that Intel launched to replace the Core 2. While the new Nehalem architecture is a huge win on servers, it's kind of "meh" on the desktop. I have endless battles with overzealous developers who swear up and down that they use their desktops like servers. Sure you do! And you're building the space shuttle with it, right? Of course you are. Yeah.

Meanwhile, back on Planet Desktop, there were some other reasons that I started thinking seriously about upgrading from my overclocked Core 2 Duo to a Core i7 upgrade:

At this point, I had the seven year upgrade itch really bad. My 3.8 GHz Core 2 Duo with 8 GB of RAM was not exactly chopped liver, but I started fantasizing a lot about the prospect of having a next generation quad-core CPU (of similar clock speed) with hyperthreading and 12 GB of RAM.

If you're wondering why I need this, or why in fact anyone would need such an embarrassment of desktop power, then I'll refer you to my friend Loyd Case.

Donâ€™t ask me why I need six cores and 24GB. To paraphrase a Zen master, if you have to ask, you do not know.

Loyd has indirectly brought up another reason to choose the i7 platform; it's pin-compatible with Intel's upcoming "Gulftown" high end 6-core CPU. So, your upgrade path is clear. (It's also rumored that the next iteration of the Mac Pro will have two of these brand new 6-core CPUs, before any other vendor gets access to them, which is totally plausible.)

As far as I'm concerned, until everything on my computer happens instantaneously, my computer is not nearly fast enough. Besides, relative to how much my time costs, these little $200-$500 upgrades to get amazing performance are freakin' chump change. If I save a measly 15 minutes a day, it's worth it. As I like to remind pointy-haired managers all over the world, Hardware is Cheap, and Programmers are Expensive. OK, maybe I'm biased, but the conclusion was overwhemingly clear: it's UPGRAYEDD time! 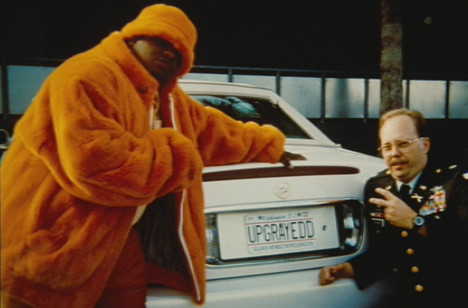 This is a more than an upgrade, though, it's a rebuild -- a platform upgrade. That means I'll be assembling the following â€¦

â€¦ and dropping that into my existing system, which is highly optimized for silence. The case, power supply, hard drives, DVD-R, etc won't change. On the outside, it'll look the same, but on the inside, it's a whole new PC. This is analogous to replacing the engine in a sports car, I suppose. On the outside, it will appear to be the same car, but there's a lot more horses under the hood.

As I said in the first part of my building your own PC series, if you can assemble a LEGO kit, you can build a PC.

Take your time, be careful, and go in the right order. So, first things first. Let's assemble the CPU, heatsink, and memory on the motherboard -- in that specific sequence, because modern heatsinks can be a pain to attach. 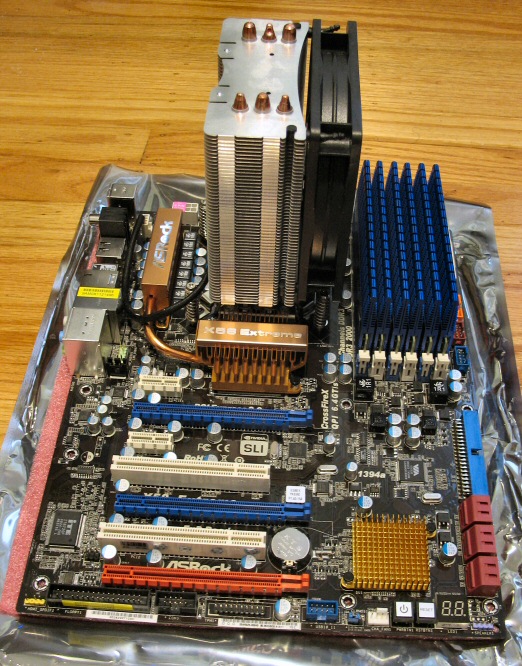 Man, check out at all that hot, sweet, PC hardware! I get a little residual thrill just cropping the picture. Love this stuff! Anyway, that gives us a mountable motherboard with all the important bits pre-installed:

update: since a few people asked, here are my case and power supply recommendations.

It adds up to about $1000 all told. A rebuild is definitely more expensive than one-off upgrades of CPU, memory, and hard drive. But, remember, this is a rebuild of my PC -- and a fire-breathing, top of the line performance rebuild at that. That takes spending a moderate (but not exorbitant) amount of money.

Now that we've got all that stuff assembled, the next thing to do is open my existing PC, disconnect all the cables going to the motherboard, temporarily remove any expansion cards, unscrew the motherboard and lift it out. 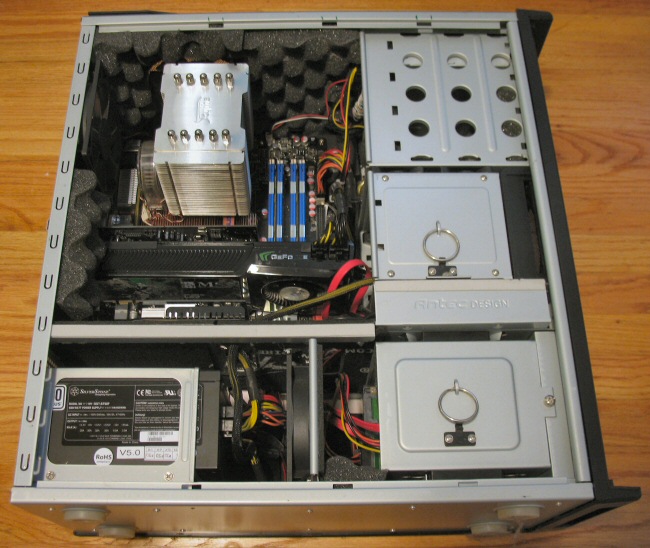 Once the old motherboard assembly was pulled out, I plopped in the new motherboard, screwed it down, and reattached the cables and expansion cards. Don't close up the PC at this point, though. Before powering it on, double check and make sure all the cables are reattached correctly:

If anything is wrong, we'll just have to re-open the case again. On top of that, we need to monitor temperatures and airflow, and that's much easier with the case open.

Fortunately, my rebuild booted up on the first try. If you're not so lucky, don't fret! Disconnect the power cord, then go back and re-check everything. I get it wrong, sometimes, too; I actually forgot to reconnect the video card power connectors, and was wondering why only the secondary video card was booting up. Once I re-checked, I immediately saw my mistake, fixed it, and rebooted.

Once you have a successful boot, don't even think about booting into the operating system yet. Enter the BIOS (this is typically done by pressing F12 or Delete during bootup) and check the BIOS screens to make sure it's detecting your hard drives, memory, and any optical drives successfully. Browse around and do some basic reality checks. Then do not pass GO, do not collect $200, go straight to your motherboard manufacturer's website and download the latest BIOS. On another computer, obviously. Most modern motherboards allow updating the BIOS from a USB key, so just copy the BIOS files on the USB key, reboot, and use the BIOS menus to update. After you've updated the BIOS, set BIOS options to taste, and we're finally ready to boot into an operating system.

While this may sound like a lot of work, it really isn't. All told it was maybe an hour, tops. I'm fairly experienced at this stuff, but it's fundamentally not that complicated; it's still just a very fancy adult LEGO kit.

Courtesy of this $1000 rebuild, my ancient 2.5 year old PC is reborn as a completely new state-of-the-art PC, at least internally. That was always part of the plan! Next up -- once we've proven that it's stable in typical use -- overclocking, naturally. I'll have more on that in a future blog post, but I can tell you right now that Core i7 overclocking is â€¦ interesting.