It's Clay Shirky's Internet, We Just Live In It

I can't remember when, exactly, I discovered Clay Shirky, but I suspect it was around 2003 or so. I sent him an email about micropayments, he actually answered it, and we had a rather nice discussion on the topic. I've been a fan of Clay's writing ever since. (In case you're curious, Clay was right -- micropayments are dead -- and I was dead wrong. All the more reason to be a fan.)

I don't think you'll find a smarter, more articulate writer on the topic of internet community than Clay Shirky. His A Group Is Its Own Worst Enemy, for example, is the seminal article on the folly of addressing social software problems purely through technology. I've referenced Clay a number of times on this blog, and his writing seems more and more prescient with each passing year. It's Clay Shirky's Internet; we just live in it.

Gin, Television, and Social Surplus is a more recent example:

Did you ever see that episode of Gilligan's Island where they almost get off the island and then Gilligan messes up and then they don't? I saw that one. I saw that one a lot when I was growing up. And every half-hour that I watched that was a half an hour I wasn't posting at my blog or editing Wikipedia or contributing to a mailing list. Now I had an ironclad excuse for not doing those things, which is none of those things existed then. I was forced into the channel of media the way it was because it was the only option. Now it's not, and that's the big surprise. However lousy it is to sit in your basement and pretend to be an elf, I can tell you from personal experience it's worse to sit in your basement and try to figure if Ginger or Mary Ann is cuter.

And I'm willing to raise that to a general principle. It's better to do something than to do nothing. Even lolcats, even cute pictures of kittens made even cuter with the addition of cute captions, hold out an invitation to participation. When you see a lolcat, one of the things it says to the viewer is, "If you have some sans-serif fonts on your computer, you can play this game, too." And that message -- I can do that, too -- is a big change.

This is something that people in the media world don't understand. Media in the 20th century was run as a single race -- consumption. How much can we produce? How much can you consume? Can we produce more and you'll consume more? And the answer to that question has generally been yes. But media is actually a triathlon, it 's three different events. People like to consume, but they also like to produce, and they like to share.

It's exactly this sort of deep, penetrating insight which makes me wonder if Clay Shirky will be looked back on as one of the key historical figures of the nascent internet era. Maybe I'm just a naive fanboy, but the guy seems to see a lot farther than everyone else. So you can imagine the great interest I had in Clay's new book, Here Comes Everybody: The Power of Organizing Without Organizations. 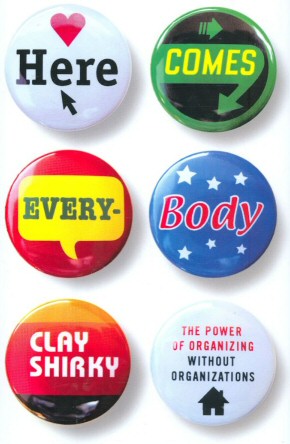 (I'm showing the UK version of the book cover because it's about a zillion times better than the US cover. Seriously, what were they thinking?)

After reading Here Comes Everybody, I'm happy to report that it does not disappoint. I'd even go so far as to say if you're developing social software of any kind, this book should be required reading. I feel so strongly about this, in fact, that I just gave my copy to my stackoverflow coding partner. And I will be following up with pop quizzes. What's that, you say? You don't develop social software? Are you sure?

So I said, narrow the focus. Your "use case" should be, there's a 22 year old college student living in the dorms. How will this software get him laid?

That got me a look like I had just sprouted a third head, but bear with me, because I think that it's not only crude but insightful. "How will this software get my users laid" should be on the minds of anyone writing social software (and these days, almost all software is social software).

"Social software" is about making it easy for people to do other things that make them happy: meeting, communicating, and hooking up.

As Jamie Zawinski once said, these days, almost all software is social software.

If you're not able to devote the time to the book, I encourage you to at least check out Clay's 42 minute presentation on "Here Comes Everybody" from earlier this year.

I found the introduction particularly inspiring; I've transcribed it here.

I've been writing principally for an audience of programmers and engineers and techies and so forth for about a dozen years. I wanted to write this book for a general audience, because the effects of the internet are now becoming broadly social enough that there is a general awareness that the internet isn't a decoration on contemporary society, but a challenge to it. A society that has an internet is a different kind of society, in the same way that a society that has a printing press was a different kind of society. We're living through the largest increase in human expressive capability in history.

It's a big claim. There are really only four revolutions that could compete for that:

These are the media revolutions that existed as part of the landscape prior to our historical generation. There is a curious asymmetry to them, which is the ones that create groups don't create two-way communication, and the ones that create two-way communications don't create groups. Either you had something like a magazine or television, where the broadcast was from the center to the edge, but the relationship was between producer and consumer. Or you had something like the telephone, where people could engage in a two-way conversation, but the medium didn't create any kind of group.

And then there's now. What we've got is a network that is natively good at group forming. In fact, this isn't just a fifth revolution. It holds the contents of the previous revolutions, which is to say we can now distribute music and movies and conversations all in this medium. But the other thing it does is move us into a world of two-way groups. Thirty years from now, when I'm presenting this book, if I had to describe it in one bullet point -- this is what the bullet point would say:

Now, it could be that blogging and working on stackoverflow is clouding my perspective, making these social software issues unusually relevant to my work. When I wrote:

I realized, that's it. That's it exactly. That is what is so intensely satisfying about writing here. My happiness only becomes real when I share it with all of you.

I didn't realize the serendipitous parallels between that sentiment and Clay's claim that the internet runs on love:

I have no idea if stackoverflow will be a "big thing" or not. But it sure is nice to wake up in the morning and work on building a community of people who love computers and code as much as I do.

OpenID: Does The World Really Need Yet Another Username and Password?