It's been six years since I wrote Discussions: Flat or Threaded? and, despite a bunch of evolution on the web since then, my opinion on this has not fundamentally changed.

If anything, my opinion has strengthened based on the observed data: precious few threaded discussion models survive on the web. Putting aside Usenet as a relic and artifact of the past, it is rare to find threaded discussions of any kind on the web today; for web discussion communities that are more than ten years old, the vast majority are flat as a pancake.

I'm game for trying anything new, I mean, I even tried Google Wave. But the more I've used threaded discussions of any variety, the less I like them. I find precious few redeeming qualities, while threading tends to break crucial parts of discussion like reading and replying in deep, fundamental, unfixable ways. I have yet to discover a threaded discussion design that I can tolerate long term.

A part of me says this is software Darwinism in action: threaded discussion is ultimately too complex to survive on the public Internet. 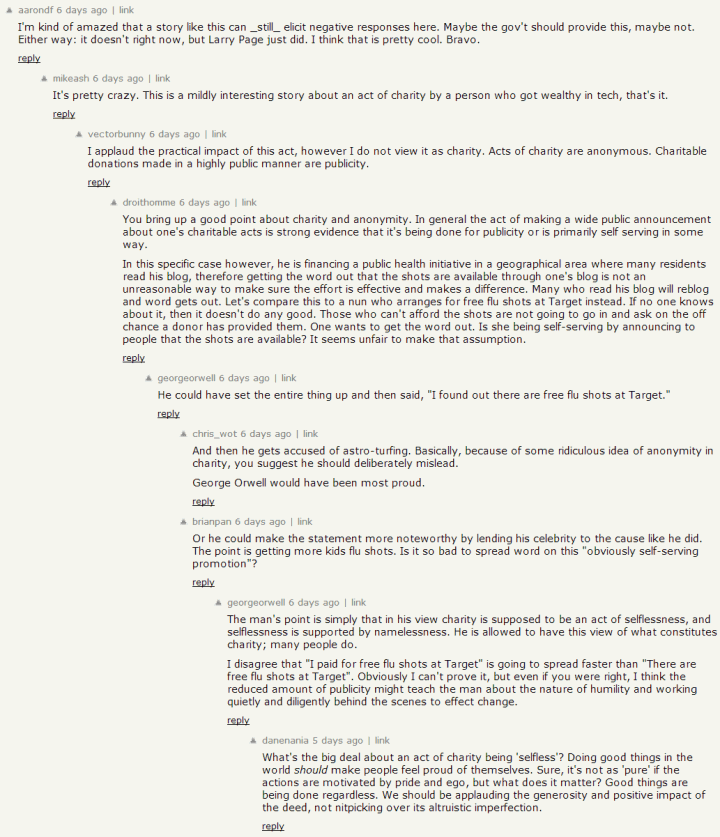 Before threaded discussion fans bring out their pitchforks and torches, I fully acknowledge that aspects of threading can be useful in certain specific situations. I will get to that. I know I'm probably wasting my time even attempting to say this, but please: keep reading before commenting. Ideally, read the whole article before commenting. Like Parappa, I gotta believe!

Before I defend threaded discussion, let's enumerate the many problems it brings to the table:

Full bore, no-holds-barred threading is an unmitigated usability disaster for discussion, everywhere I've encountered it. But what if we didn't commit to this idea of threaded discussion quite so wholeheartedly?

The most important guidance for non-destructive use of threading is to put a hard cap on the level of replies that you allow. Although Stack Exchange is not a discussion system – it's actually the opposite of a discussion system, which we have to explain to people all the time – we did allow, in essence, one level of threading. There are questions and answers, yes, but underneath each of those, in smaller type, are the comments. 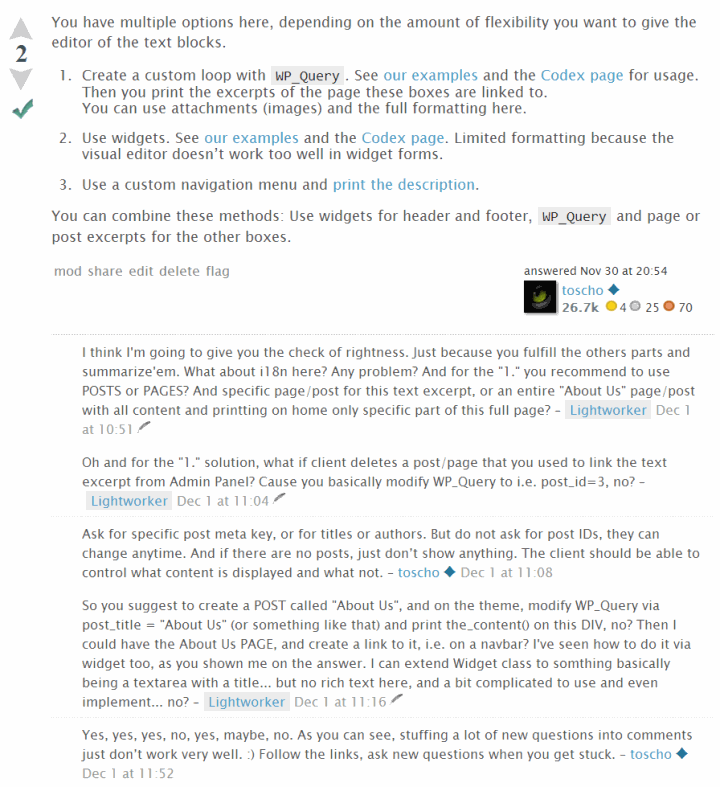 Now there's a bunch of hard-core discussion sociology here that I don't want to get into, like different rules for comments, special limitations for comments, only showing the top n of comments by default, and so forth. What matters is that we allow one level of replies and that's it. Want to reply to a comment? You can, but it'll be at the same level. You can go no deeper. This is by design, but remember: Stack Exchange is not a discussion system. It's a question and answer system. If you build your Q&A system like a discussion system, it will devolve into Yahoo Answers, or even worse, Quora. Just kidding Quora. You're great.

Would Hacker News be a better place for discussion if they capped reply level? Would Reddit? From my perspective as a poor, harried reader and very occasional participant, absolutely. There are many chronic problems with threaded discussion, but capping reply depth is the easiest way to take a giant step in the right direction.

Another idea is to let posts bring their context with them. This is one of the things that Twitter, the company that always does everything wrong and succeeds anyway, gets … shockingly right out of the gate. When I view one of my tweets, it can stand alone, as it should. But it can also bring some context along with it on demand: 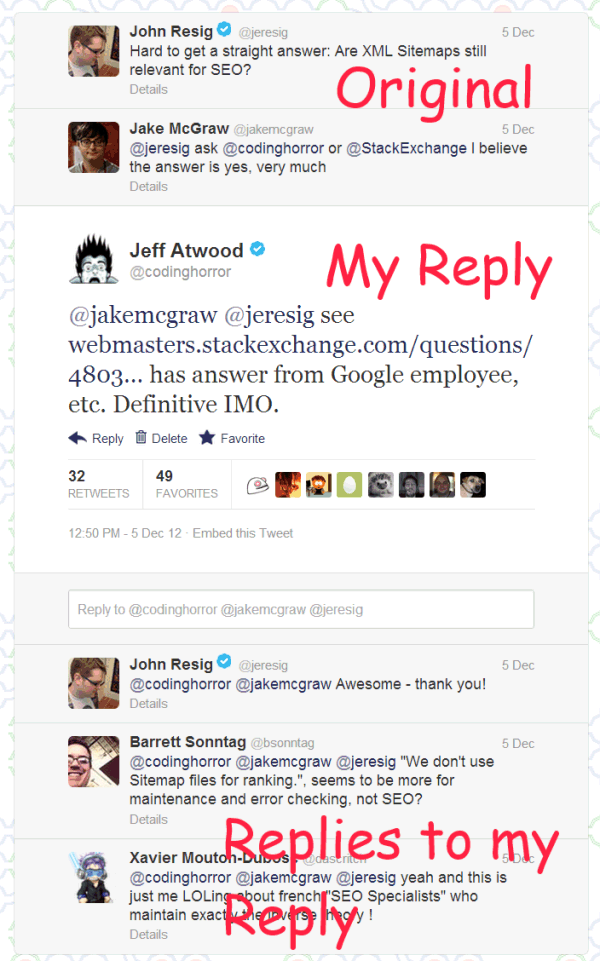 Here you can see how my tweet can be expanded with a direct link or click to show the necessary context for the conversation. But it'll only show three levels: the post, my reply to the post, and replies to my post. This idea that tweets – and thus, conversations – should be mostly standalone is not well understood, but it illustrates how Twitter got the original concept so fundamentally right. I guess that's why they can get away with the terrible execution.

I believe selective and judicious use of threading is the only way it can work for discussion. You should be wary of threading as a general purpose solution for human discussions. Always favor simple, flat discussions instead.