Or, What Would World Wide Web Developers Do?

To get an idea of what web developers are using -- as compared to typical web users -- take a look at the comprehensive w3schools browser statistics, picking up from mid-2004 when the Google statistics end: 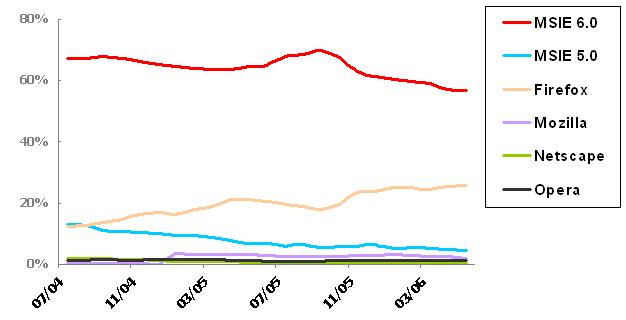 Quite a difference from the other browser market share statistics; IE 6.0 is dominant, but not overwhelmingly dominant to the tune of 95% market share at its peak in late 2004. It's also interesting that despite being five years old and generally reviled by most serious web developers, IE 6 usage has only dipped ten percent from its historical peak on w3schools.

The other statistics from w3schools are also quite interesting:

I'm not sure how much we can conclude from a single source of data. But it's still a little discouraging that even on a developer-oriented site, the rate of new hardware and software adoption is so slow.

How Long Would It Take if Everything Went Wrong?