I apologize for the scarcity of updates lately. There have been two things in the way:

On top of all that, according to the program, I just found that my presentation involves interpretive dance, too. Man. I wish someone had told me! My moves are so rusty, they've barely improved from Electric Boogaloo. But hey, at least I don't have to sing Andrews Sister songs like poor Brian Fling.

And then, of course, there's that crazy Stack Overflow thing I'm always yammering on about. Very busy there, our team is expanding, and we have big plans for this year, too.

But, there is hope!

Thanks to the fine folks at Six Apart – and more specifically the herculean efforts of one Michael Sippey – Coding Horror is now hosted in the TypePad ecosystem. Which means, at least in theory, better "cloud" type reliability in the future. (cough)

One accidental bit of collateral damage was that comments, by necessity, were disabled during this two month period. At first, I was relieved. This may seem a bit hypocritical, since I originally wrote A Blog Without Comments is Not a Blog. And I still believe it too. But as I prophetically noted in the very same post:

I am sympathetic to issues of scale. Comments don't scale worth a damn. If you have thousands of readers and hundreds of comments for every post, you should disable comments and switch to forums, probably moderated forums at that. But the number of bloggers who have that level of readership is so small as to be practically nil. And when you get there, believe me, you'll know. Until then, you should enable comments.

I guess you can put this in the "nice problems to have" category, but let me tell you, it's not so nice of a problem when it's on your plate. At a large enough scale, comments require active moderation or they rapidly go sour. People get mean, the crazies come out in full force, and the comments start to resemble an out of control trailer park reality show brawl. It's fun, I suppose, but in a way that drives out all the sane people. Left unchecked, the best you can hope for is to end up head resident at the sanitarium. And that's a hell of a way to go out. 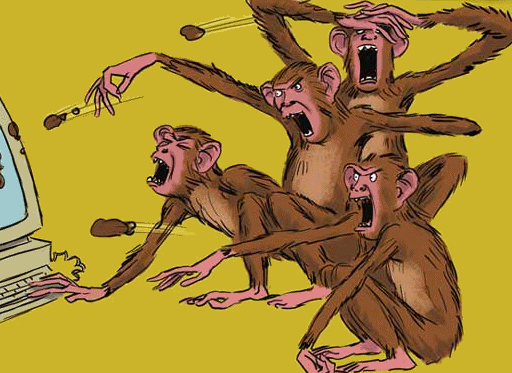 (the above is from Mike Reed's amazing Flame Warriors series, by the way. Well worth your time if you haven't seen it already.)

The degeneration of comments was a shame, because it undermined my claim that comments are awesome.

It's an open secret amongst bloggers that the blog comments are often better than the original blog post, and it's because the community collectively knows far more than you or I will ever know.

The best part of a blog post often begins where the blog post ends. If you are offended by that, I humbly submit you don't understand why blogs work.

Why would I have bothered to found Stack Overflow with Joel Spolsky if I didn't believe in the power of community – that none of us is as dumb as all of us? Honestly, a lot of the design of Stack Overflow comes from my personal observations about how blog comments work. But my creaky old Coding Horror comments offered none of the fancy voting and moderation facilities that make Stack Overflow work. And without ample free personal time and attention from me to weed the comment garden, the comments got out of control.

Most of all, I blame myself.

I got some amazing emails in lieu of comments on my last few blog posts, and it positively kills me that these emails were only seen by two sets of eyes instead of the thousands they deserve. That's a big part of why I hate email silos. And really, email in general.

But there was another unanticipated side effect of having comments disabled that Stephane Charette pointed out to me in email.

Here is an interesting "silver lining" to the crash you had. Without
comments, it forces us, your faithful readers, to think more about what you have to say.

In a way, things are back to how your blog used
to be. In recent years, the huge influx of comments means that we – or just I? – end up spending 1/4 of my time reading what you wrote, and then merging in what everyone else wrote. Depending on how I feel about the topic and your approach to the issue, the weight values may be very different than 50/50. But regardless, I always have to consider when clicking on my Coding Horror bookmark: "Is now the right time to check if he has a new entry? Do I have enough time to read through a hundred comments? Should I wait until later tonight when the kids are in bed to go read his latest article?"

I never thought about it until recently. Your crash is what brought this up to light. Like tonight, when I saw your new headline in my iGoogle page, I didn't have to consider whether or not it was the right time. I read the article, and then thought for myself. I didn't let other people's comments steer my thoughts. How nice!

I'm not certain why it works like this. Often, the sheer number of comments distracts from what you wrote, but for some reason, it is impossible not to at the very least scroll through what people say. In a way, your blog has ended up like a slashdot article, with a paragraph or two of content at the top, and then everyone wanting to insert their $0.02.

Thinking for yourself. Now there's a novel idea. In the reverberating echo chamber that is the internet, I think we would all do well to remind ourselves of that periodically.

He's also right that the psychic burden of all those comments was weighing not just on readers, but on me, the writer, too. That's why I had a false sense of freedom when comments were disabled. You mean I can say whatever I want, and nobody can contradict me underneath my very own post? Revolutionary!

There are some absolute gems of insight and observation in comments, but sometimes extracting them was too much like pulling teeth. At the same time, I felt obligated to read all the comments on every post of mine. If I was asking people to read the random words I'm spewing all over the internet, how could I not extend my commenters the same courtesy? That's just rude.

It seems the only thing worse than comments being on was comments being off. It started to feel empty. As if I was in an enormous room, presenting to an eerily mute audience.

So, while I am very glad to have comments back, and I welcome dialog with the community, there will be … changes. For the benefit of everyone's mental health.

The good news is that the TypePad commenting system supports a veritable laundry list of authentication mechanisms -- OpenID (naturally), Twitter, Facebook, Google, Yahoo, and many others. So authenticating to post a comment should only present a mild, but necessary, barrier to conversation.

I'm not looking for sycophants, but shrill argument is every bit as bad. When you comment here, try to show the class something interesting they can use. That's all I'm asking.

It feels good to be back. Thanks to Six Apart for making it happen.

And, most of all, thanks to you for reading.