Back in September 2008, I mentioned that we were spawning a new process. Well, that process arrived today, and its id is Henry Burton Atwood.

We're starting him off right with a little light reading. 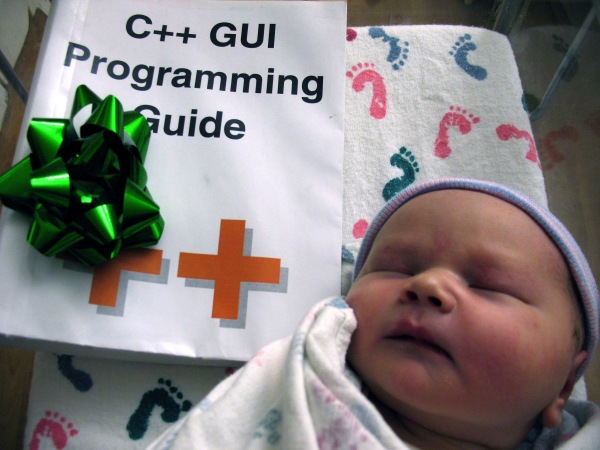 You may recognize this book from Apple's Mac vs PC ad series, specifically, the "Gift Exchange" Mac vs PC ad. 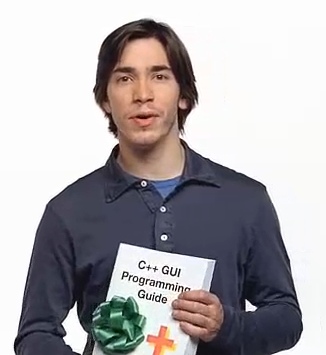 Because, truly, what better gift is there for a newborn than the C++ GUI Programming Guide? Watch the ad to see what I mean. "I've been eyeing that myself."

All credit for creation of this new process of course goes to my wife Betsy who did the real work. I now truly understand the meaning of the classic Bill Cosby skit on childbirth.

Helping my wife walk the pain scale, going from pain level 7/10, 8/10 and then seeing the maw of darkness that lies at pain scale 10/10 and beyond, was quite an experience. How much pain? Well, imagine the worst pain you've ever experienced. Now imagine taking that pain, packing it in to a rickety Oldsmobile, setting it on fire, then driving it off the edge of a cliff at maximum speed. Into a valley filled with white-hot molten lava.

It's a little bit worse than that.

You may have heard that childbirth is a mystical, spiritual process. The thing that ties every human being together as one long continuous string of life, extending all the way back to the beginning of time. To a point, it is. As my friend Phil said, it's all ponies and butterflies. Until the ponies and butterflies start spontaneously screaming. But, it was all worth it to get Henry, who is genetically engineered to be awesome. Being a geek from birth, Henry has his own Twitter account, which was opened with exactly the first message you'd expect:

If you've been reading my blog for a while, I'm sure you know I will approach our new parenting adventure the same way I do programming -- with absolutely no freaking idea what I'm doing. And often hilarious results.

Here's to you, little guy, and every other little programmer being born around the world.