A Blog Without Comments Is Not a Blog

James Bach responded to my recent post, Are You Following the Instructions on the Paint Can?, with Studying Jeff Atwood's Paint Can. I didn't realize how many assumptions I made in that post until I read Mr. Bach's pointed response. The most amusing assumption I made – and I had no idea I was doing this – was that I ran a painting business in college! The paint can instructions make sense to me because of that prior experience. Pity the would-be handyman who has never painted anything before and has only a few paragraphs of text on the back of a can to refer to.

But I'll reserve a complete response to Mr. Bach for later. My immediate frustration is that James has comments disabled on his blog, so I can't form a public reply to James without creating a post on my own blog.

I firmly maintain that a blog without comments enabled is not a blog. It's more like a church pulpit. You preach the word, and the audience passively receives your evangelical message. Straight from God's lips to their ears. When the sermon is over, the audience shuffles out of the church, inspired for another week. And there's definitely no question and answer period afterward. 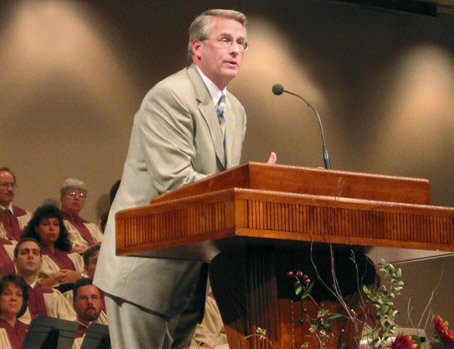 However we slice it, with comments disabled the reader's hands are tied. If readers want to have a public dialog with you, then your readers must have blogs of their own. This strikes me as awfully elitist.

Yes, the barriers to entry for blogging are radically lower, but not everyone has the time or inclination to become a full-bore blogger. Are you really comfortable saying, in effect, unless you have a blog I am not interested in what you have to say? Because I'm not.

That said, I realize that comments aren't appropriate for every blog in the world:

Blogs are susceptible to the same problems as social software sites (as well as having to deal with comment spamming scum). The more popular the blog, the bigger the problem. Just ask Heather or Jason.

Most blogs allow comments. There's no doubt about it; having comments enabled is likely to increase the popularity of your blog.

But that, in and of itself, is not a good justification. It assumes that popularity is desirable. The truth is that, when it comes to personal publishing, it's not the amount of people who visit that count, it's who those people are why they're visiting that's important.

Comments are a shortcut to a Pyrrhic victory of popularity at the cost of having your pages cluttered with pointless remarks (by pointless, I don't just mean the negative stuff: "me too!" and "great post!" achieve as little as "you suck!"). If popularity is your aim, it's better in the long run to claw your way towards that goal on the strength of your writing or design skills.

But comments can add value. They are particularly useful on sites that have a narrow, focused scope. The focused nature of the subject matter ensures that visitors share a common interest – otherwise, they wouldn't be there.
The more general a site's focus, the less chance there is of it receiving quality comments. A site that covers everything from politics (Republican vs. Democrat) to computing (Mac vs. PC) is going to be flame-war central.

Jeremy's observation about the effect of topic on comments is interesting. Again, something I wouldn't have anticipated based on my experience with a very focused blog.

Some people refuse to enable comments because they don't want to deal with the spam problem. I can appreciate this concern, but a simple CAPTCHA is extremely effective at blocking machine spam. And a simple daily browse of your comments will catch those rare manually entered spam comments. Why in the world would you enable comments if you're not planning to read them at some point?

I am sympathetic to issues of scale. Comments don't scale worth a damn. If you have thousands of readers and hundreds of comments for every post, you should disable comments and switch to forums, probably moderated forums at that. But the number of bloggers who have that level of readership is so small as to be practically nil. And when you get there, believe me, you'll know. Until then, you should enable comments.

The more I think about this, the more I keep coming back to my original position: a blog without comments enabled is not a blog. I'm not sure what it is, exactly, but it definitely isn't a blog.

Of Spaces, Underscores and Dashes

Web 2.0 and The "Whatever Box" Server