When Joel Spolsky, my business partner on Stack Overflow and Stack Exchange, asked me what I wanted to do after I left Stack Exchange, I distinctly remember mentioning Aaron Swartz. That's what Aaron was to us hackers: an exemplar of the noble, selfless behavior and positive action that all hackers aspire to – but very few actually achieve.

And now, tragically, Aaron is gone at the tender age of 26. He won't be achieving anything any more. 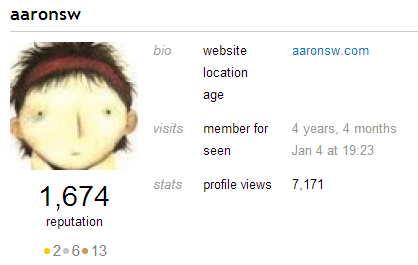 Most of all, I am disappointed.

I'm deeply disappointed in myself, for not understanding just how bitterly unfair the government charges were against Aaron. Perhaps the full, grotesque details couldn't be revealed for a pending legal case. But we should have been outraged. I am gutted that I did not contribute to his defense in any way, either financially or by writing about it here. I blindly assumed he would prevail, as powerful activists on the side of fairness, openness, and freedom are fortunate enough to often do in our country. I was wrong.

I'm disappointed in our government, for going to such lengths to make an example of someone who was so obviously a positive force. Someone who actively worked to change the world for the better in everything he did, starting from the age of 12. There was no evil in this man. And yet the absurd government case against him was cited by his family as directly contributing to his death.

I'm frustrated by the idea that martyrdom works. The death of Aaron Swartz is now turning into an effective tool for change, a rallying cry, proving the perverse lesson that nobody takes an issue seriously until a great person dies for the cause. The idea that Aaron killing himself was a viable strategy, more than going on to prevail in this matter and so many more in his lifetime, makes me incredibly angry.

But also, I must admit that I am a little disappointed in Aaron. I understand that depression is a serious disease that can fell any person, however strong. But he chose the path of the activist long ago. And the path of the activist is to fight, for as long and as hard as it takes, to effect change. Aaron had powerful friends, a powerful support network, and a keen sense of moral cause that put him in the right. That's how he got that support network of powerful friends and fellow activists in the first place.

It is appropriate to write about Aaron on Martin Luther King day, because he too was a tireless activist for moral causes.

I hope you are able to see the distinction I am trying to point out. In no sense do I advocate evading or defying the law, as would the rabid segregationist. That would lead to anarchy. One who breaks an unjust law must do so openly, lovingly, and with a willingness to accept the penalty. I submit that an individual who breaks a law that conscience tells him is unjust, and who willingly accepts the penalty of imprisonment in order to arouse the conscience of the community over its injustice, is in reality expressing the highest respect for law.

Let's be clear that the penalty in Aaron's case was grossly unfair, bordering on corrupt. I've been a part of exactly one trial, but I can't even imagine having the full resources of the US Government brought to bear against me, with extreme prejudice, for a year or more. His defense was estimated to cost millions. The idea that such an engaged citizen would be forever branded a felon – serving at least some jail time and stripped of the most fundamental citizenship right, the ability to vote – must have weighed heavily on Aaron. And Aaron was no stranger to depresson, having written about it on his blog many times, even penning a public will of sorts on his blog all the way back in 2002.

I think about ragequitting a lot.

Rage Quit, also seen as RageQuit in one word, is Internet slang commonly used to describe the act of suddenly quitting a game or chatroom after either an argument, extreme frustration, or loss of the game.

At least one user ragequits Stack Exchange every six months, because our rules are strict. Some people don't like rules, and can respond poorly when confronted by the rules of the game they choose to play. It came up often enough that we had to create even more rules to deal with it. I was forced to think about ragequitting.

I was very angry with Mark Pilgrim and _why for ragequitting the Internet, because they also took all their content offline – they got so frustrated that they took their ball and went home, so nobody else could play. How incredibly rude. Ragequitting is childish, a sign of immaturity. But it is another thing entirely to play the final move and take your own life. To declare the end of this game and all future games, the end of ragequitting itself.

I say this not as a person who wishes to judge Aaron Swartz. I say it as a fellow gamer who has also considered playing the same move quite recently. To the point that I – like Aaron himself, I am sure – was actively researching it. But the more I researched, the more I thought about it, the more it felt like what it really was: giving up. And the toll on friends and family would be unimaginably, unbearably heavy.

What happened to Aaron was not fair. Not even a little. But this is the path of the activist. The greater the injustice, the greater wrong undone when you ultimately prevail. And I am convinced, absolutely and utterly convinced, that Aaron would have prevailed. He would have gone on to do so many other great things. It is our great failing that we did not provide Aaron the support network he needed to see this. All we can do now is continue the mission he started and lobby for change to our corrupt government practices of forcing plea bargains.

It gets dark sometimes. I know it does. I'm right there with you. But do not, under any circumstances, give anyone the satisfaction of seeing you ragequit. They don't deserve it. Play other, better moves – and consider your long game.