Twenty-four years ago today, I had a very bad day.

On August 8, 1988, I was a senior in high school. I was working my after school and weekend job at Safeway as a cashier, when the store manager suddenly walked over and said I better stop ringing up customers and talk to my mother on the store phone right now. Mom told me to come home immediately because, well, there were police at the front door asking for me with some legal papers in hand.

Like I said, definitely not a good day. The only sliver of good news was that I was still 17 at the time, so I enjoyed the many protections that the law provides to a minor. Which I shall now throw away by informing the world that I am a dirty, filthy, reprehensible adult criminal. Thanks, law!

One of the problems you had in the pre-Internet 1980s as a hardcore computer geek was that all the best bulletin boards and online services were kind of expensive. Either because you had to pay an hourly fee to access them, like CompuServe, or because they were a long distance modem call. Or both. Even after the 1984 AT&T breakup, long distance at around 20-30 cents a minute was a far, far cry from today's rates. (Does anyone actually even worry about how much voice calls cost any more, to anywhere in the world? This, my friends, is progress.)

Remember, too, that this is back when 9600 baud modems were blazing, state of the art devices. For perspective, the ultra-low-power wireless bluetooth on your phone is about 80 times faster. If you wanted to upload or download any warez software, that meant potentially hours on your modem at rates of around $20/hour. Adjusted for inflation, that's closer to $40 in 2012 dollars. My family wasn't well off enough to afford a second telephone line, so most of my calling was done late at night both because the rates were lower, and also so that I wouldn't be monopolizing the telephone. Nothing was worse than the dreaded "mom picked up the phone" disconnect to an elite difficult-to-access BBS with limited slots.

One way or another, I eventually got involved with the seedier side of the community, even joining a lesser Apple // pirate group. Probably my main claim to fame is that while trolling BBSes, I personally discovered and recruited a guy who turned out to be an amazing cracker. He was so good he eventually got recruited away. 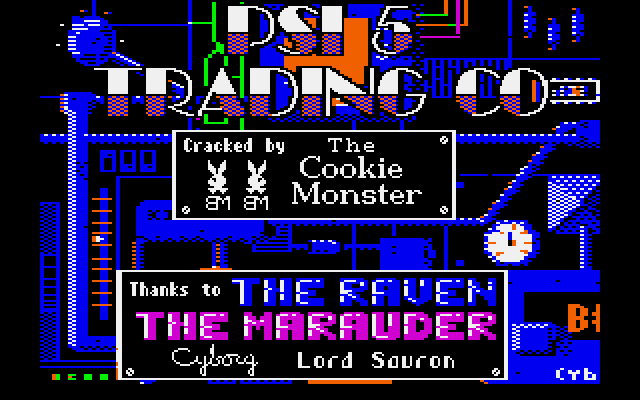 I was, at best, a footnote to a footnote to a footnote in Apple // history. This was mainly a process of self-discovery for me. I learned I was the type of geek who doesn't even bother attending his high school prom, partially because I was still afraid of girls even as a high school senior, yes, but mainly because I was so addicted to computers and playing my tiny role in these nascent online communities. I was, and am, OK with that. This is the circuitous path of 30 years that led me to create Stack Overflow. And there's more, so much more, but I can't talk about it yet.

But addicted, I think, is too weak a word for what I felt about being a part of these oddball, early online home computer communities. It was more like an all-consuming maniacal blood lust. So obtaining access to free, unlimited long distance calling rapidly became an urgent priority in my teenage life. I needed it. I needed it so bad. I had to have it to talk on the phone to the other members of my motley little crew, who were spread all over the USA, as well as for calling BBSes.

I can't remember exactly how I found it, probably on one of the BBSes, but I eventually discovered a local 804 area code number for "calling cards" that accepted a 5 digit PIN, entered via touch-tone phone. Try over and over, and you might find some valid PIN codes that let you attain the holy grail of free long distance calling. Only one small problem: it's a crime. But, at least to my addled teenage brain, this was a victimless crime, one that I had to commit. The spice must flow!

All I had to do is write software to tell the modem to dial over and over and try different combinations. Because I was a self-taught programmer, this was no problem. But because I was an overachieving self-taught programmer, I didn't just write a program. No, I went off and built a full-blown toolkit in AppleBasic, with complete documentation and the best possible text user interface I could muster, and then uploaded it to my favorite BBSes so every other addict could get their online modem fix, too. I called it The Hacking Construction Set, and I spent months building it. I didn't just gold plate, I platinum plated this freaking thing, man. (Yes, I know the name isn't really correct. I read as many 2600 textfiles as the next guy. This is mere phreaking, not hacking, but I guess I was shooting for poetic license. Maybe you could use the long distance dialing codes to actually hack remote machines, or something.)

I never knew if anyone else ever used my little program to dial for calling codes. It certainly worked for me, and I tried my level best to make it work for all the possible dialing situations I could think of. It even had an intro screen with music and graphics of my own creation. But searching now, for the first time in 24 years, I found my old Hacking Construction Set disk image on an Apple ROM site. It even has real saved numbers in the dialing list! Someone was using my illicit software! 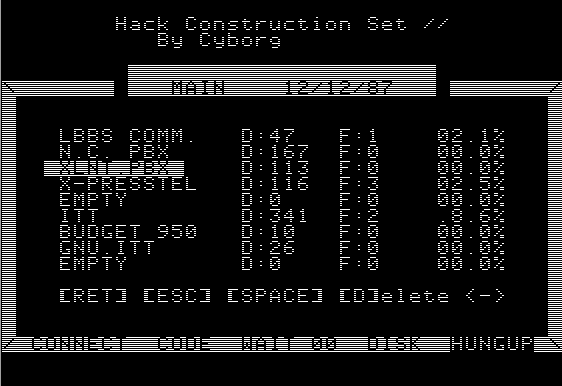 If you're curious, fire up your favorite Apple // emulator and give the disk image a spin. Don't forget to connect your modem. There's full blown documentation accessible from the main menu. Which, re-reading now, was actually not half bad, if I do say so myself: 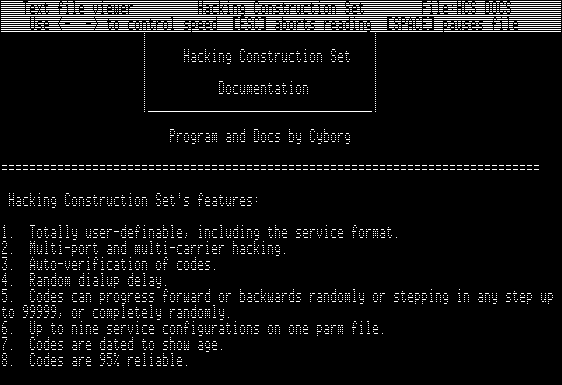 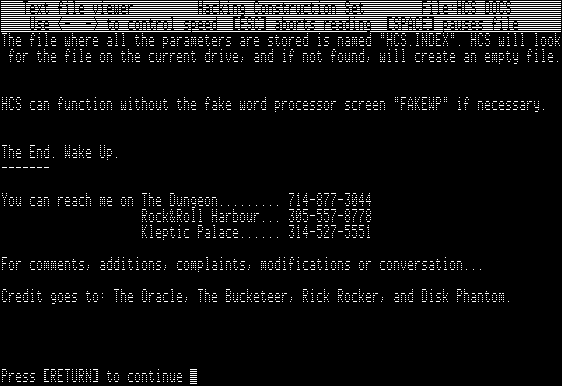 I used to regularly call BBSes in Florida, California, and Missouri? That's news to me; I haven't seen any of this stuff in over 24 years! All I did was upload a disk image to a few BBSes in 1986. After all that time, to discover that someone used and loved my little bit of software still gives me a little thrill. What higher praise is there for a software developer?

About that trouble. Using my own software got me in trouble with the law. And deservedly so; what I wrote the software to do was illegal. I hired a local lawyer (who, as I recall, was missing a hand; he had a prosthetic hand that was almost impossible not to look at) who represented me. It was quite clear at preliminary hearings that the Chesterfield County court system did not see any computer crime cases, and they had absolutely no idea what to make of me, or what this was all about. All they saw was a smart kid with a bit of bad judgment who loved computers and was headed to the University of Virginia, most likely not a life as a career criminal. So the case was dismissed for the cost of lawyer's fees. Which, for the record, I had to pay myself, using my income as a Safeway cashier.

This was definitely a wake up call for me; in the summer of 1988, I was about to graduate from high school, and I thought I'd try being just a regular guy at college, with less of an obsessive focus on computers that causes me to get in trouble with the law, and perhaps spread my wings to other interests. Who knows, maybe even girls!

That didn't last long. Because after all these years, I must confess I've grown to love my own bad judgment. It's led me to the most fascinating places.

Today is Goof Off at Work Day