A commenter recently noted that it was difficult to print the Programmer's Bill of Rights post. And he's right. It's high time I set up a print stylesheet for this website. I added the following link tag to the page header:

The printer-specific CSS is very simple. On a modern site using <div> based layout, optimizing for printers is easy.

The entire printer-friendly CSS file is a mere 35 lines including generous whitespace. Testing the print stylesheet is a piece of cake, too. Just use the File, Print Preview menu: 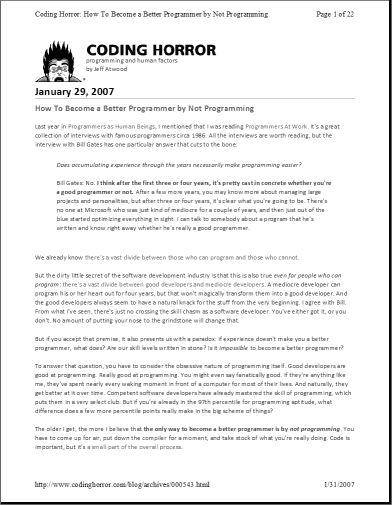 Looks good to me.

Once you've set up a print stylesheet, you might as well set up a mobile stylesheet, too, because they're almost identical. We just add another link tag to the page header:

The CSS is a subset of the printer CSS, so I won't reprint it here. I only hide the links <div>. Testing rendering on a mobile device is a bit more difficult, but it is possible. Here's what it looks like on the new Samsung Blackjack phones we received at work: 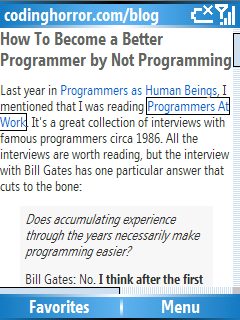 If you're wondering what your website looks like on a mobile device, wonder no longer. Try it yourself and see. The Windows SmartPhone / PocketPC emulator was surprisingly easy to get up and running. Here's what you'll need:

Once you've downloaded it all, install it in this order:

I chose to launch the "Smartphone QVGA - Coldboot" emulator. Once it's running, the only tricky part is enabling internet connectivity. This post describes how to enable internet connectivity in the emulator; you place the emulated smartphone in the virtual "cradle" so it can access the network through ActiveSync. Note that you'll also need to set "Allow connections to one of the following" to "DMA" in the File, Connection Settings menu of ActiveSync.

How To Become a Better Programmer by Not Programming