Pop quiz, hotshot. How do you know if your application works? Sure, maybe your app compiles. Maybe it passes all the unit tests. Maybe it ran the QA gauntlet successfully. Maybe it was successfully deployed to the production server, or packaged into an installer. Maybe your beta testers even signed off on it.

But that doesn't mean it works.

And you regularly do usability testing on your application, right?

Usability testing has been around for a long time, and the basic idea is pretty simple: If you want to know whether your software or your Web site or your VCR remote control is easy enough to use, watch some people while they try to use it and note where they run into trouble. Then fix it, and test it again.

In the beginning, though, usability testing was a very expensive proposition. You had to have a usability lab with an observation room behind a one-way mirror, and at least two video cameras so you could record the users' reactions and the thing they were using. You had to recruit a lot of people so you could get results that were statistically significant. It was Science. It cost $20,000 to $50,000 a shot. It didn't happen very often.

But in 1989 Jakob Nielsen wrote a paper titled "Usability Engineering at a Discount" and pointed out that it didn't have to be that way. You didn't need a usability lab, and you could achieve the same results with a lot fewer users. The idea of discount usability testing was a huge step forward. The only problem is that a decade later most people still perceive testing as a big deal, hiring someone to conduct a test still costs $5,000 to $15,000, and as a result it doesn't happen nearly often enough.

What I'm going to commend to you in this chapter is something even more drastic: Lost our lease, going-out-of-business-sale usability testing. I'm going to try to explain how to do your own testing when you have no money and no time. If you can afford to hire a professional to do your testing, by all means do it -- but don't do it if it means you'll do less testing.

Krug points out that usability testing is only as difficult as you make it. It's possible to get useful results from a usability test with a single user, even:

[Usability] testing always works, and even the worst test with the wrong user will show you things you can do to improve your site. I make a point of always doing a live user test at my workshops so that people can see it's very easy to do and it always produces an abundance of valuable insights. I ask for a volunteer and have him try to perform a task on a site belonging to one of the other attendees. These tests last less than ten minutes, but the person whose site is being tested usually scribbles several pages of notes. And they always ask if they can have the recording of the test to show their team back home. Once person told me that after his team saw the recording, they made one change to their site which they later calculated had resulted in $100,000 in savings.

For more proof that you don't need a lot of users to have an effective usability test, Jakob Neilsen offers the following graph: 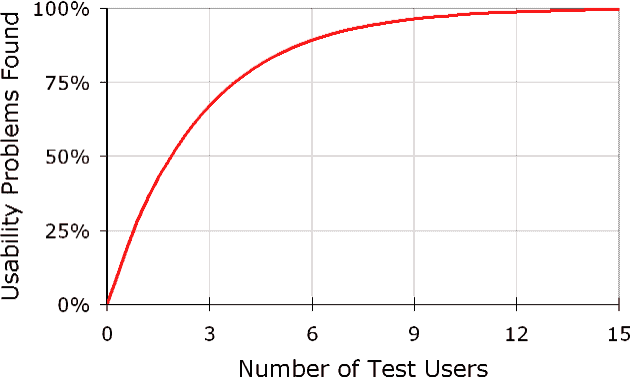 If you don't already own a copy of Don't Make Me Think, shame on you. In the meantime, I highly recommend downloading Chapter 9 of Steve Krug's Don't Make Me Think (pdf), which has much more detail than the summary I've presented.

Usability testing doesn't have to be complicated. If you really want to know if what you're building works, ask someone to use it while you watch. If nothing else, grab Joe from accounting, Sue from marketing, grab anyone nearby who isn't directly involved with the project, and have them try it. Don't tell them what to do. Give them a task, and remind them to think out loud while they do it. Then quietly sit back and watch what happens. I can tell you from personal experience that the results are often eye-opening.

The benefits of usability testing are clear. You just have to do it to realize any of those benefits.