I've witnessed the death of the main menu. And toolbars are on their last legs, too. This screenshot* clinches it for me: 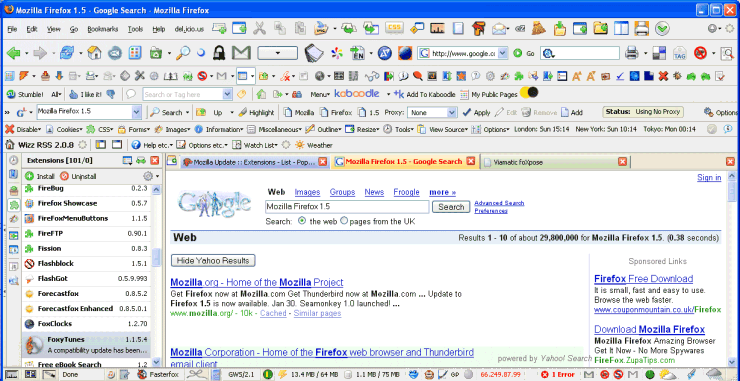 Granted, very few people would install this many Firefox extensions. But between this and the Office 2003 debacle, it's patently obvious that the whole menu-and-toolbar paradigm doesn't scale. At all.

[..] many of today's UI paradigms attributed to Apple were introduced well before the Lisa or the Macintosh. Regardless of who gets credit for them, they're good paradigms. There's nothing wrong with menu and toolbar based UI for certain applications. These paradigms served Office well for a number of releases.

It's not that menus and toolbars are bad or that the people who created them weren't smart. The problem is that Office has outgrown them. There's a point beyond which menus and toolbars cease to scale well. A flat menu with 8 well-organized commands on it works just great; a three-level hierarchical menu containing 35 loosely-related commands can be a bit of a disaster.

I'm now starting to question whether traditional menus and toolbars are even appropriate for small applications any more. Web applications tend to be small by design-- and you never see drop-down menus or tiny 16x16 draggable toolbar icons. And they're better without these things.