Loyd Case recently noted that the standard 3-prong computer power connector is.. not so standard any more:

I have yet to see any of these mutant rounded power connectors yet, but I'm surprised that Dell-- a company that built its entire empire around the very concept of beige box PC standardization-- would be cheeky enough to introduce a non-standard power connector. Dell has improved a bit in the design area, but the last thing they need to be redesigning is the standard 3-pin computer power connector.

Given the three zillion different 2-pin power cords out there, it's a miracle that the other end of the cable is standardized. How did we screw that up?

And this is just for computers, mind you. Once we factor in cell phones, PDAs, MP3 players, routers, etcetera, the situation worsens considerably. We moved from North Carolina to California almost a year ago and I still can't find the power adapter for our XM Satellite radio boombox.. among other things.

One possible answer is to pick up a third-party solution like Kensington's 120w mobile power or iGo's 70w Juice.

These power bricks can power a multitude of devices via interchangeable cord tips. Assuming the correct power tip is available, of course. The best solution would be for manufacturers to standardize on a common set of power connectors. I won't be holding my breath until that happens.

Jef Raskin, in The Humane Interface, points out yet another problem with connectors: sex. 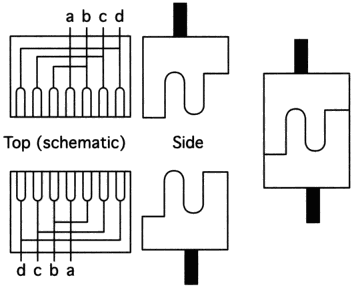 Raskin outlines the advantages of a connector that's both male and female:

Unfortunately, hermaphroditic connectors haven't caught on, at least for consumer electronics. And I still have about a fifty percent chance of plugging a USB cable in right side up on any given day.

Teach Yourself Programming in 23 Hours