Most discussions show a bit of information next to each user: 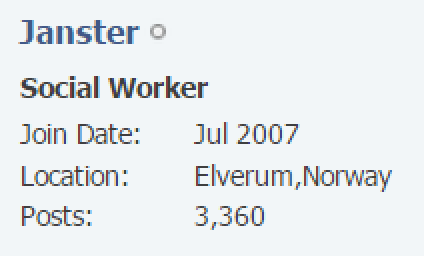 What message does this send?

If I have learned anything from the Internet, it is this: be very, very careful when you put a number next to someone's name. Because people will do whatever it takes to make that number go up.

If you don't think deeply about exactly what you're encouraging, why you're encouraging it, and all the things that may happen as a result of that encouragement, you may end up with … something darker. A lot darker.

Printing a post count number next to every user's name implies that the more you post, the better things are. The more you talk, the better the conversations become. Is this the right message to send to everyone in a discussion? More fundamentally, is this even true?

I find that the value of conversations has little to do with how much people are talking. I find that too much talking has a negative effect on conversations. Nobody has time to listen to the resulting massive stream of conversation, they end up just waiting for their turn to pile on and talk, too. The best conversations are with people who spend most of their time listening. The number of times you've posted in a given topic is not a leaderboard; it's a record of failing to communicate.

Consider the difference between a chat room and a discussion. Chat is a never-ending flow of disconnected, stream of consciousness sentences that you can occasionally dip your toes in to get the temperature of the water, and that's about it. Discussion is the process of lobbing paragraphs back and forth that results in an evolution of positions as your mutual understanding becomes more nuanced. We hope.

Ars Technica ran a little experiment in 2011. When they posted Guns at home more likely to be used stupidly than in self defense, embedded in the last sentence of the seventh paragraph of the article was this text:

If you have read this far, please mention Bananas in your comment below. We're pretty sure 90% of the respondants to this story won't even read it first.

The first person to do this is on page 3 of the resulting discussion, comment number 93. Or as helpfully visualized by Brandon Gorrell:

Plenty of talking, but how many people actually read up to paragraph 7 (of 11) of the source article before they rushed to comment on it?

In You Won't Finish This Article, Farhad Manjoo dares us to read to the end.

Only a small number of you are reading all the way through articles on the Web. I’ve long suspected this, because so many smart-alecks jump in to the comments to make points that get mentioned later in the piece.

But most of us won't.

He collected a bunch of analytics data based on real usage to prove his point: 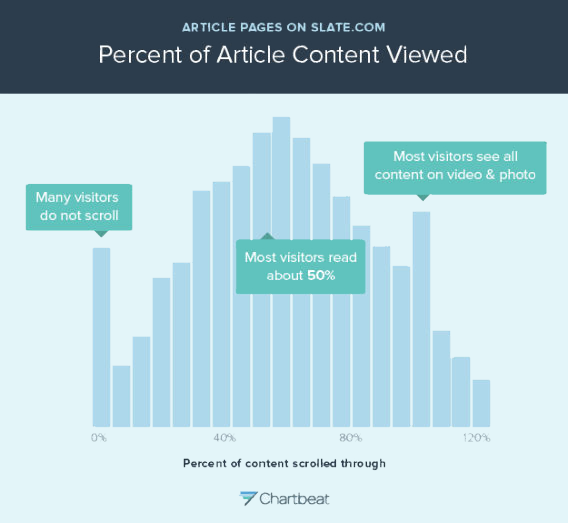 And online, listening = reading. That old school program from my childhood was right, so deeply fundamentally right. Reading. Reading Is Fundamental.

Let's say you're interested in World War II. Who would you rather have a discussion with about that? The guy who just skimmed the Wikipedia article, or the gal who read the entirety of The Rise and Fall of the Third Reich?

This emphasis on talking and post count also unnecessarily penalizes lurkers. If you've posted five times in the last 10 years, but you've read every single thing your community has ever written, I can guarantee that you, Mr. or Mrs. Lurker, are a far more important part of that community's culture and social norms than someone who posted 100 times in the last two weeks. Value to a community should be measured every bit by how much you've read as much as how much you talked.

So how do we encourage reading, exactly?

You could do crazy stuff like require commenters to enter some fact from the article, or pass a basic quiz about what the article contained, before allowing them to comment on that article. On some sites, I think this would result in a huge improvement in the quality of the comments. It'd add friction to talking, which isn't necessarily a bad thing, but it's a negative, indirect way of forcing reading by denying talking. Not ideal.

I have some better ideas.

I know, that old saw, gamification, but if you're going to reward someome, do it for the right things and the right reasons. For example, we created a badge for reading to the end of a long 100+ post topic. And our trust levels are based heavily on how often people are returning and how much they are reading, and virtually not at all on how much they post.

To feel live reading rewards in action, try this classic New York Times Article. There's even a badge for reading half the article!

These are strategies I pursued with Discourse, because I believe Reading Is Fundamental. Not just in grade school, but in your life, in my life, in every aspect of online community. To the extent that Discourse can help people learn to be better listeners and better readers – not just more talkative – we are succeeding.

If you want to become a true radical, if you want to have deeper insights and better conversations, spend less time talking and more reading.

Update: There's a CBC interview with me on the themes covered in this article.

The Evolution of eInk