On my first visit to the Fog Creek Software offices in 2008, I was surprised to see programmers zooming around the office on scooters. I didn't realize that scooters were something geeks would be into, but it sure looked like fun, albeit borderline dangerous fun, on the 25th floor of an office building in Manhattan.

It turns out that having children is a great excuse reason to get into fun things like scooters. I didn't know much about scooters for adults, so being an obsessive geek, of course I had to research the heck out of this topic. My research turned up the Xootr MG as a top choice. 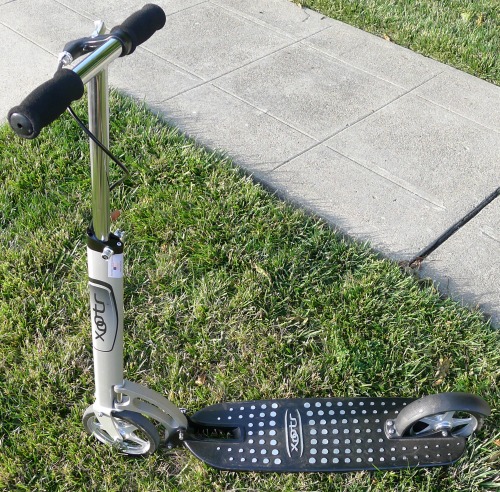 But per my research (and now, personal experience) scooters are also surprisingly practical forms of transportation in certain situations, namely when …

Scooters are very primitive machines; it is both their greatest strength and their greatest weakness. It's arguably the simplest personal wheeled vehicle there is. In these short distance scenarios, scooters tend to win over, say, bicycles because there's less setup and teardown necessary – you don't have to lock up a scooter, nor do you have to wear a helmet (though I highly recommend one). Just hop on and go! You get almost all the benefits of gravity and wheeled efficiency with a minimum of fuss and maintenance. And yes, it's fun, too!

I'm just a scooter newbie, but the Xootr MG has a few characteristics I liked a lot, including rock-solid construction, a front brake (not super efficient, but reasonably effective when combined with the rear foot fender brake), and a wide, comfortable platform for your feet. But it does take some effort to kick around – don't forget to alternate your legs – and the ride can be rough at times depending on the surface. Large bumps and very uneven surfaces are wreck material. And going uphill on a scooter, beyond the absolute wussiest and mildest of grades, is simply out of the question.

For longer distances, or if the terrain is rougher or hillier, a scooter might work, but it'd be a tough way to travel. What you need in those cases is a small, portable bicycle – one you can take with you. I've dabbled in foldable bicycles before, and we own two Dahon folding bicycles. They're great, versatile and inexpensive bikes. 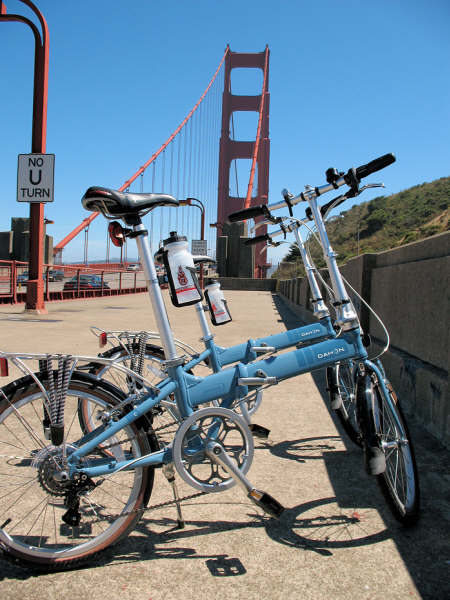 Dahon makes fine traditional folding bicycles, but they are not quite as pick-up-and-go as I would like for short trips. As an experiment, I purchased something I've had my eye on for a long time: the Strida LT folding bicycle. Or, as I like to call it, my "mid-life crisis vehicle". 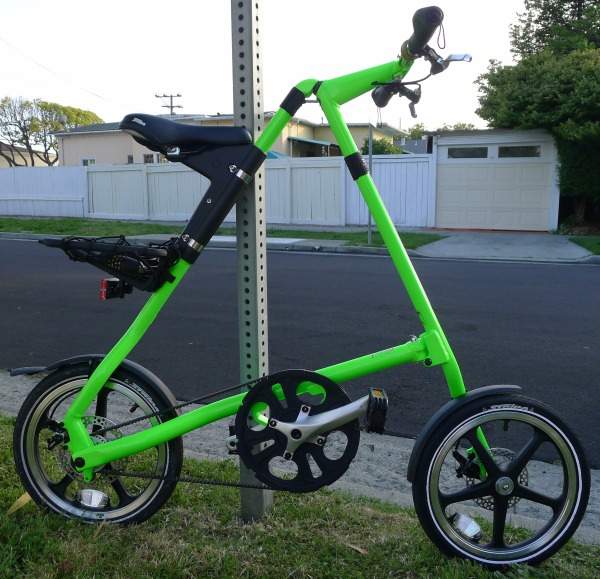 (also pictured: some cool accessories that I recommend for Strida owners: a Cateye Reflex rear LED light on the rack, Knog beetle silicone front LED light on the handlebars, and a Sunlite Bicycle bungie cargo net.)

The appeal of the Strida is that it folds down to an incredibly small size.

It's almost a pogo stick in folded form. I took my Strida on a short trip into San Francisco for a speaking gig in the city, which involved riding on BART, and the Strida in practice is everything I dreamed a modern ultra-portable folding bicycle could be:

The Strida may look odd, and perhaps it is odd, but I found it to be shockingly close to an ideal go-anywhere do-anything convenience bicycle. It isn't perfect, of course:

None of these criticisms apply to the Dahon, so hopefully you can get a sense of the dividing line between an ultra-folder and a plain old folding bicycle.

Being a geek, it's not like I spend a lot of time outdoors. But when I do venture outside, I like to travel in a manner befitting a geek. That is, with my utility belt fully equipped, and in the dorkiest, most efficient vehicle possible for a trip of that particular length. Scooters, folding bicycles, recumbents, pogo sticks … whatever it takes. If you, too, would like to geek out around town, consider adding the Xootr MG scooter and Strida LT folding bicycle to your stable of geek transportation systems.