But You Did Not Persuade Me

One of my favorite movie scenes is from The Last King of Scotland, a dramatized "biography" of the megalomaniac dictator Idi Amin, as seen through the eyes of a fictional Scottish personal physician.

If you haven't watched this movie yet, you should. It is amazing. (For trivia buffs, this is the video clip that prompted me to write YouTube vs. Fair Use. I eventually switched to hosting it locally using the HTML5 video tag.)

What I love about this tour de force of a scene – beyond the incredible acting – is that it illustrates just how powerful of a force persuasion really is. In the hands of a madman or demagogue, dangerously powerful. Hopefully you don't deal with too many insane dictators on a daily basis, but the reason this scene works so well is the unavoidable truth it exposes: to have any hope of influencing others, you must be able to persuade them.

Steve Yegge is as accomplished a software engineer as I can think of. I was amazed to hear him tell us repeatedly and at length on a podcast that the one thing every software engineer should know is not how to write amazing code, but how to market themselves and their project. What is marketing except persuasion?

Marc Hedlund, who founded Wesabe and is now the VP of Engineering at Etsy, thinks of himself not as a CEO or boss, but as the Lobbyist-in-Chief. I believe that could be re-written as Persuader-in-Chief with no loss of meaning or nuance.

I was recently asked how I run our development team. I said, “Well, basically I blog about something I think we should do, and if the blog post convinces the developers, they do it. If not, I lobby for it, and if that fails too, the idea falls on the floor. They need my approval to launch something, but that’s it. That’s as much ‘running things’ as I do, and most of the ideas come from other people at this point, not from me and my blog posts. I’ve argued against some of our most successful ideas, so it’s a good thing I don’t try to exert more control.”

I’m exaggerating somewhat; of course I haven’t blogged about all of our ideas yet. But I do think of myself as Lobbyist-in-Chief, and I have lots of good examples of cases where I failed to talk people into an idea and it didn’t happen as a result. One person I said this to asked, “So who holds the product vision, then?” and I replied, “Well, I guess I do,” but really that’s not right. We all do. The product is the result of the ideas that together we’ve agreed to pursue. I recruit people based on their interest in and enthusiasm about the ideas behind Wesabe, and then set them loose, and we all talk and listen constantly. That’s how it works — and believe it or not, it does work.

So how do we persuade? Primarily, I think, when we lead by example. Even if that means getting down on your knees and cleaning a toilet to show someone else how it's done. But maybe you're not a leader. Maybe you're just a lowly peon. Even as a peon, it's still possible to persuade your team and those around you. A commenter summarized this grassroots method of persuasion nicely:

Science and data are among the best ways to be objectively persuasive, but remember that data alone isn't the reductionist end of every single topic. Beware the 41 shades of blue pitfall.

Yes, it’s true that a team at Google couldn’t decide between two blues, so they’re testing 41 shades between each blue to see which one performs better. I had a recent debate over whether a border should be 3, 4 or 5 pixels wide, and was asked to prove my case. I can’t operate in an environment like that. I’ve grown tired of debating such minuscule design decisions. There are more exciting design problems in this world to tackle.

If I measure by click data alone, all Internet advertising should have breasts in it. Incorporate data, by all means. But you need to tell a bigger, grander, more inspiring story than that to be truly persuasive.

I re-read Letter from a Birmingham Jail every year because I believe it is the single best persuasive essay I've ever read. It is remarkably persuasive without ever resorting to anger, incivility, or invective. Read it now. But do more than just read; study it. How does it work? Why does it work? Does it cite any data? What techniques make this essay so incredibly compelling? 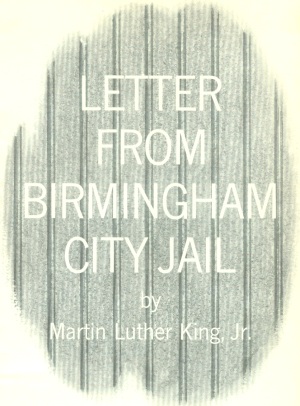 Nobody ever changed anything by remaining quiet, idly standing by, or blending into the faceless, voiceless masses. If you ever want to effect change, in your work, in your life, you must learn to persuade others.