Whatever Happened to Civility on The Internet?

In response to Wil Shipley's recent post about the lack of an iPhone SDK, a reader left this comment:

I often enjoy reading these entries, but you always come across as a little bit of an a**hole. Full of yourself, overly critical and a bit mean. Dismissing and dissing, out of pure ignorance and spite, the work of the people who made Javascript – people who have done more for the world, and written a better language, than you have or likely ever will – is truly a huge a**hole move.

Although I'm a staunch proponent of comments for most blogs, it's comments like this – what Anand Iyer calls nerd rage – that cause me to question my stance. I don't think it's necessarily wise to dignify these kind of comments with a response, but a few comments later, Wil Shipley responded with exactly what I was thinking:

Miss Manners once said the rudest thing to do is point out someone else's rudeness in public. By extension, what do you suppose the biggest a**hole move is?

Bonus points for invoking Miss Manners; her Guide to Excruciatingly Correct Behavior has been a staple of my bookshelf for years. Think what you will about stodgy old Judith Martin, but she has a razor wit and an enduring, keen eye for human behavior. I learned a lot about life by reading her guide in my early twenties; it's a rich comedy of errors in book form that I earnestly recommend to everyone. 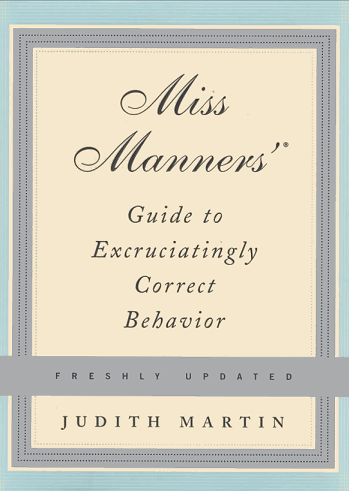 I understand the G.I.F.T. is an unfortunate side-effect of anonymity and the faceless interaction mode of the internet. But I think we can do better. As Miss Manners said:

You can deny all you want that there is etiquette, and a lot of people do in everyday life. But if you behave in a way that offends the people you're trying to deal with, they will stop dealing with you. There are plenty of people who say, 'We don't care about etiquette, but we can't stand the way so-and-so behaves, and we don't want him around!' Etiquette doesn't have the great sanctions that the law has. But the main sanction we do have is in not dealing with these people and isolating them because their behavior is unbearable.

I don't object to criticism. Criticism is what comments are for. What I object to is criticism that resorts to least-common-denominator attacks. The use of angry invective negates any criticism you were trying to make. Insulting someone might make you feel temporarily vindicated, or give you a brief, cathartic moment of release, but you aren't convincing anyone of anything. People will read your angry words and see them – and you – for what you are. It's a completely self-defeating exercise. The minute you call someone an a**hole, they're no longer listening to you.

For an example of effective criticism of the strongest kind, I can think of no better piece than Martin Luther King's Letter From Birmingham Jail. I re-read it every year, and each time I'm floored by the passion behind this incredible persuasive essay – and the deep anger and frustration it presents in such rational terms.

While confined here in the Birmingham city jail, I came across your recent statement calling my present activities "unwise and untimely." Seldom do I pause to answer criticism of my work and ideas. If I sought to answer all the criticisms that cross my desk, my secretaries would have little time for anything other than such correspondence in the course of the day, and I would have no time for constructive work. But since I feel that you are men of genuine good will and that your criticisms are sincerely set forth, I want to try to answer your statements in what I hope will be patient and reasonable terms.

This legendary essay demonstrates the fine art of disagreement: the ability to respect the people you disagree with, and to earn their respect in turn. The only way to do that is to be civil, reasonable, and rational.