It's been over a year since I built my last PC, and all those killer Core 2 Duo benchmark and overclocking results were making me anxious. I just pulled the trigger on the following Core 2 Duo upgrade:

I'm not replacing my video card, hard drive, power supply, or case. This is a straight "drop in" replacement for my existing Athlon X2 4800+.

First, a few words on why I chose these specific parts. Computer hardware is one of my few indulgences, but I do a freakishly obsessive amount of research before buying anything. Allow me to share my freakish obsession with you, dear reader. After all, that's what the internet is for.

My general strategery with computer upgrades is to buy upper midrange and overclock myself into high-end territory for extra value. The Core 2 Duo CPU makes this easy, because they're all incredible overclockers. I overclocked my $319 2.4 GHz E6600 chip beyond $999 Core 2 "extreme" X6800 territory with a few quick modifications in the BIOS: 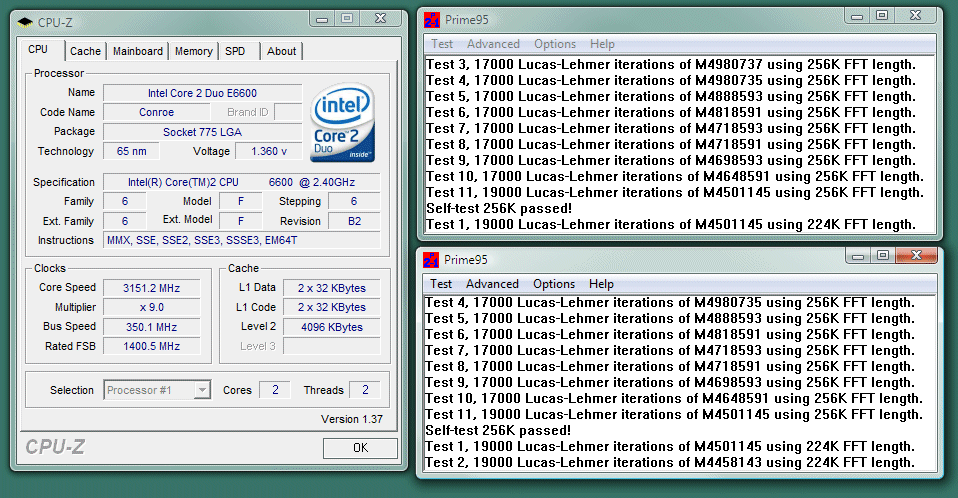 As a responsible overclocker, I also ensure the system is actually stable at these settings through hours and hours of Prime 95 torture testing. I still have those two instances of Prime95 running in the background as I'm writing this post.

* Sounds traumatic, but if you want to make an omelette, you have to break some eggs. Don't be afraid to break stuff.