I've commented on .NET compiler performance before, and I recently uncovered another Xbit Labs article that confirms my previous conclusion: 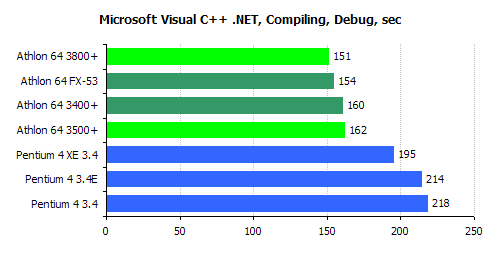 For compiling .NET code, the Athlon 64 is 33% faster than a Pentium 4 of the same speed. That's a significant productivity boost for a developer. Time spent compiling is time wasted staring at the build output window. Compiling doesn't typically take long enough to force me to ALT+TAB away and start doing something else, so there's no real incentive to multitask.. and those wasted seconds add up throughout the day.

And that's assuming we're comparing apples to apples, eg, CPUs of the same clock rating. If we remove that restriction, you could buy the cheapest Athlon 64 available and still get better .NET compiler performance than the fastest Pentium 4 available. That's cash in your pocket twice: once for the purchase of the less expensive CPU, and again as you spend less time writing the same code.

As something of a homebrew hardware enthusiast, I tend to upgrade my computer once per yer, and I'm due. So, based on the above, I'm placing this order with NewEgg:

The really interesting item here is the PC-V1000 case; it looks vaguely like the recent Apple G5 series, but has a number of unique innovations in addition to its looks, such as the placement of the power supply at the bottom of the case.

Did I mention that the Athlon 64 is also significantly faster for gaming? And has the possibility to get even faster with the upcoming 64-bit edition of Windows XP? Plus it has support for the XP SP2 no-execute bit hardware protection that no Intel chip can (currently) offer? Well, that's just icing on the cake!

If you're not into building your own computers-- although trust me, it's easy-- don't waste your time looking for an Athlon 64 system on the Dell website. Dell has some kind of satanic pact with Intel, and even though the Athlon 64 is a superior technology-- in pretty much everything except for media encoding-- they will never offer it. I suggest looking on the HPaq website; they offer laptops and desktops with the Athlon 64.

I'm smarter than the Runtime!

Putting the Science Back Into Computer Science