I added a little bit of PC quieting magic as a finishing touch. Here's a picture of the final interior, with two types of damping foam -- generic eggcrate foam and thin PAX.MATE style foam. Which one I use depends on how much room I have to work with in each area of the case. 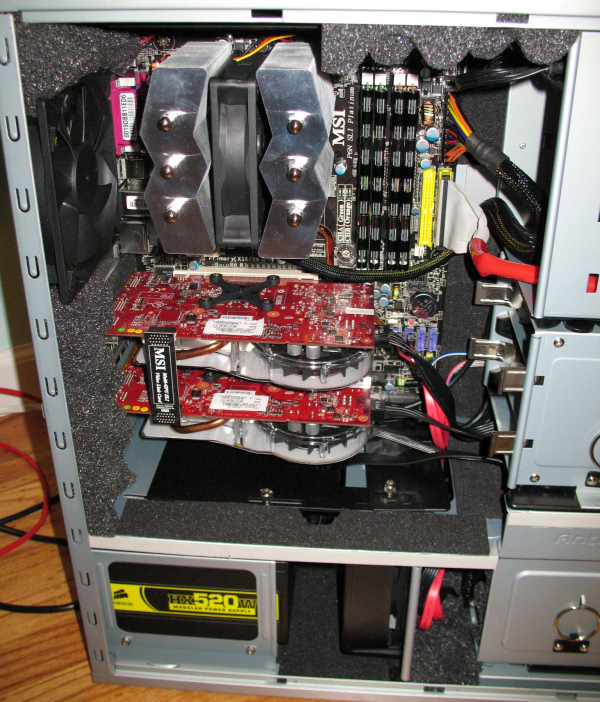 The goal is to build a sound dampening chamber around the motherboard, CPU, hard drives (particularly the hard drives), and video cards. Instead of the typical hard, reflective metal inside a case, the sound now bounces off rough, absorbent foam surfaces instead. You can't see it in this shot, but the case cover has a layer of PAX.MATE foam applied as well to complete the "chamber". If you've ever been in a recording studio with foam damping material on the walls, you know how effective it can be at absorbing and diffusing sound. As I discussed in my earlier article on building a quiet PC, the foam damping is a final, finishing step. It won't magically convert a noisy PC into a quiet one, but it can make an already quiet PC that much quieter. The effect is subtle but definitely audible.

At any rate, the rig is now burned in, complete, and ready to ship to Scott. I was surprised to find that the 64-bit version of Vista produced better Windows Experience scores on the exact same hardware: Scott's system now scores 5.9 across the board, except for memory, which scores 5.8. Go figure.

I hope you found the series useful and fun. I know I did. We also recorded a Hanselminutes episode where we discussed the philosophy behind the build, and answered a bunch of listener questions; listen to the show for background.

But in the meantime, if this piqued your interest, now it's your turn to build a PC. There was a lot of interest in doing a PC build jamboree at the office, and I invite everyone to participate... at least virtually. I can offer the following refined build menu based on my experience with Scott's build-- and recent Intel CPU price cuts.

Of course, prices are only valid as of the time I write this post. And feel free to substitute any items between the configurations as you deem necessary. It's your PC; build it the way you want.

Building a PC at least once gives you a deeper understanding of your hardware. It isn't going to fill a specific checklist item in your resume, but the desire to try it at least once is part of the passion that a true craftsman should have for his tools. I think it's similar to how you'll frequently see the celebrity chefs on PBS go visit a winery, an organic farm, a bakery, and so on. They aren't going to learn something there that will make or break their ability to cook a specific dish. But as master craftsman they're passionate about their tools and ingredients. They want to know everything they can about them.

Building (and overclocking) PCs isn't for everyone. But I hope my series illustrated that it isn't particularly difficult -- and it sure can be rewarding if you have the time and inclination.