If you're ever in Silicon Valley, I highly recommend checking out the Computer History Museum. Where else can you see a live demonstration of the only known working PDP-1 in existence, and actually get to play the original Spacewar on it? I did. It was incredible. I got chills. And my wife was bored beyond belief, but I love her all the more for soldiering through.

Beyond the special exhibits, the Visible Storage area is where the real action is at in the museum. It takes up the majority of the floor space, and it contains every computer I've ever heard of. Among the artifacts in visible storage is one of Google's original servers from 1999: 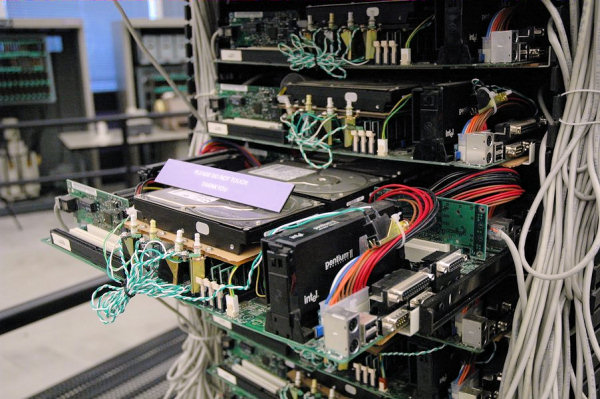 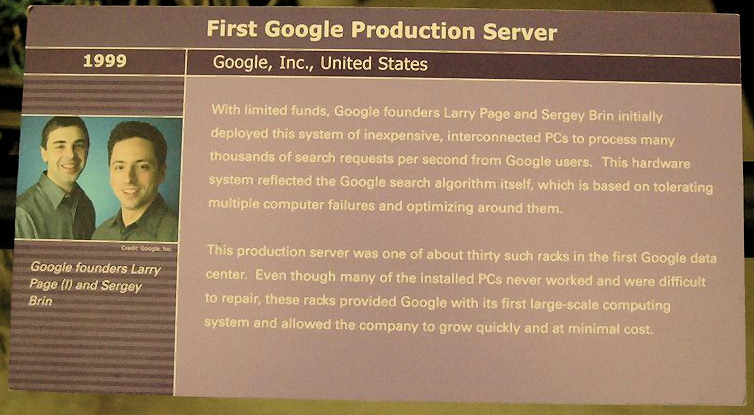 If Google's first production server resembles a hastily cobbled together amalgam of off-the-shelf computer parts circa 1999, well, that's because it is. Just like Google's original servers at Stanford. If you think this rack is scary, you should see what it replaced.

Instead of buying whatever pre-built rack-mount servers Dell, Compaq, and IBM were selling at the time, Google opted to hand-build their server infrastructure themselves. The sagging motherboards and hard drives are literally propped in place on handmade plywood platforms. The power switches are crudely mounted in front, the network cables draped along each side. The poorly routed power connectors snake their way back to generic PC power supplies in the rear.

Some people might look at these early Google servers and see an amateurish fire hazard. Not me. I see a prescient understanding of how inexpensive commodity hardware would shape today's internet. I felt right at home when I saw this server; it's exactly what I would have done in the same circumstances. This rack is a perfect example of the commodity x86 market D.I.Y. ethic at work: if you want it done right, and done inexpensively, you build it yourself.

Even today, Google is serious about exerting total control over the servers in their now-massive server farms. They build their own high-efficiency power supplies, and conduct fascinating, public research on disk failure (pdf). Current estimates put Google's server farm at around 450,000 machines-- and they're still custom built, commodity-class x86 PCs, just like they were in 1999.

Like Google, I demand total control over every part of my PC. I've always built my own. Building your own PC isn't for everyone, but if you're willing to add a little elbow grease, the D.I.Y. approach can result in a higher quality, better performing PC-- often at a substantial cost savings.

Here's a chart I put together based on my research for the Scott Hanselman Ultimate Developer Rig Throwdown:

If you're willing to factor out the cost of the operating system, the D.I.Y. "Little Bang" system offers more bang for the buck than any of its peers. And the "Big Bang" is off the charts, if you have the budget.

The Mac Pro is a beautifully designed machine, but it has some quirks, too:

If you don't have the time or inclination to build your own desktop PC, the Dells and the Mac Pro are perfectly valid choices. The prices are reasonable; the configurations flexible. There's absolutely nothing wrong with buying pre-built, as long as you spec carefully. But by the time I'm done setting up my D.I.Y. "Little Bang" system, it'll be faster, quieter, and more power efficient than any of the pre-built systems-- for the same money, or less. This is possible because the D.I.Y. system is uniquely mine; I choose exactly what goes in it, and exactly how it's configured.

We aren't typical users. We're programmers. The x86 commodity PC is the essential, ultimate tool of our craft. It's the end product of 30 years of computer evolution. And it's still evolving today, with profound impact on the way we code. If you treat your PC like an appliance you plug into a wall, you've robbed yourself of a crucial lesson on the symbiotic relationship between software and hardware. The best way to truly understand the commodity PC is to gleefully dig in and build one yourself. Get your hands dirty and experience the economics of computer hardware first hand-- the same economics that have shaped the software industry since the very first line of code was stored in memory.