Internationalization of software is incredibly challenging. Consider this Wikipedia sandbox page in Arabic, which is a right-to-left (RTL) language: 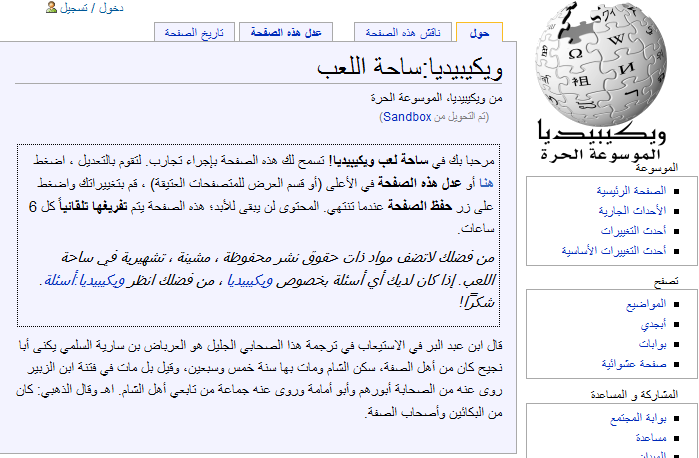 Compare that layout with the Wikipedia page on internationalization and localization in English. Now consider how you'd implement switching between English and Arabic in MediaWiki, the software that powers Wikipedia:

Beyond the purely mechanical grunt work of translation, there are deeper cultural issues to consider, such as avoiding offensive images, colors, or concepts for certain cultures – and how the concepts you're trying to express in the software will map to a given culture. As noted in a related Larry Osterman post, these deeper cultural considerations are collectively known as localization:

[localization] is a step past translation, taking the certain communication code associated with a certain culture. There are so many aspects you have to think about such as their moral values, working styles, social structures, etc... in order to get desired (or non-desired) outputs. This is one of the big reasons that automated translation tools leave so much to be desired - humans know about the cultural issues involved in a language, computers don't.

The Sims has a unique solution that sidesteps the software internationalization problem. They invented an entirely new, completely artificial language: Simlish. Simlish renders your cultural background irrelevant. When you redefine language as gibberish, it's equally meaningless to everyone. Or is it? Somehow, The Sims is playable without a lick of translation or localization, without any comprehensible language of any sort.

Signs in The Sims games often do not contain text; they consist entirely of graphics. For instance, the stop sign in The Sims is a red octagon with a flat, white hand. In The Sims 2 it becomes a white bar instead. The sign for a grocery store depicts a cornucopia, and that of a restaurant shows a hamburger or a place setting.

In The Sims, most text is only distinguishable at very close zooms. On book covers, newspapers and Nightlife's "Sims Must Wash Hands" sign, the lettering is all nonsense characters that bear about as much resemblance to Latin characters as they do to Cyrillic. Almost no actual characters from any known alphabet are used. The game uses the Simoleon sign (closely resembling ) as the currency symbol.

When Sims are writing novels or term papers, dingbats from the Wingdings font appear as text on the screen. The notebooks used for homework contain writing composed of random lines.

Characters in The SIMS don't just write in Simlish – they speak it, too:

When The Sims was originally designed, Will Wright wanted the language the Sims spoke to be unrecognizable but full of emotion. That way, every player could construct their own story without being confined to a Maxis-written script (to say nothing of the mind-numbing repetition). We experimented with fractured Ukrainian, and the Tagalog language of The Philippines. Will even suggested that perhaps we base the sound on Navajo, inspired by the code talkers of WWII. None of those languages allowed us the sound we were looking for – so we opted for complete improvisation.

Simlish is, by definition, meaningless. And yet it's surprisingly easy to figure out what a Sim is talking about, even without any visual point of reference or a facial expression to read. The intonation and context of the sounds is enough to extract meaning. Try these two Simlish MP3 samples (one, two) and hear for yourself.

Simlish even extends to music. Last year, Maxis paid many original artists to re-record their songs with Simlish lyrics:

Each artist rerecorded one of their songs with new vocal tracks, replacing English lyrics with nonsensical Sim-speak. Simlish words don't have any real meaning, so the artists were free to come up with whatever sounded good, as long as English didn't seep in. The result isn't that different from what bands like the Cocteau Twins and Vas already do. The idea is to transcend words and use the human voice to express pure emotion.

Charlotte Martin, whose song "Beautiful Life" finds its way onto the University soundtrack, took things a step further than some of the other artists. She didn't just sing gobbledygook, she made sure all the Simlish words were consistent with their counterparts in the English version. "It still had the same meaning, I just had to write it in an alien language," Martin said. In rewriting the song, Martin said it changed the way she thinks about lyrics, letting her come at her creation from a more technical standpoint, paying closer attention to syllables and rhythm.

Probably the funniest example of this is the Pussycat Dolls' re-recording of "Don't Cha" in Simlish.

Another example is Lily Allen's "Smile". Compare the original version of "Smile" with the Simlish re-recording of "Smile". It works well for that cheeky little song, but it's a little weirder when a morose band like Depeche Mode re-records a song in Simlish.

When you hear Simlish, you expect to hear meaningless gibberish. But instead, you hear something else, something unexpected. The absence of language isn't limiting; it's liberating. You move beyond language, from expressing with words to expressing visually, aurally, emotionally:

For songstress Abra Moore, whose song "Big Sky" was used in the game, singing in Simlish gave her a new perspective on her music. "It's like jazz for me; I just take to it like a duck to water," Moore said. "It was very liberating creatively." The experience made such an impression on Moore that she said she'd consider recording a song in Sim-like scat on a future album. She perceives the emotional lyrics, divorced of a specific meaning, in almost a spiritual light. She's fascinated that fans try to interpret the nonsensical lyrics. It represents the essence of human nature, Moore said, to take meaning from something that has no meaning.

Spoken words and music are dense with multiple levels of audible meaning. We probably can't take such Simlish liberties with applications and web sites, which are anchored on the flat, one-dimensional medium of text. The challenges of i18n and l10n are unavoidable for us. But as the Sims shows us, there's a lot to be said for following human conventions which work across all languages and cultures.

Dude, Where's My 4 Gigabytes of RAM?