Asa Raskin, the son of the late Jef Raskin, recently gave a presentation at Google on the work his company, Humanized, is doing. It's largely a continuation of the work of his father. One of the most interesting aspects of Jef's work was zoomable user interfaces. Asa's demo of zoomable interfaces starts at 1:05 in the video. You can interact with the very same flash demo on this page; scroll down to "Launch the Zoom Demo", and be prepared to wait a bit, as it's an 8 megabyte Flash file.

Although popularized by Jef Raskin, Humanized isn't the only company working on zoomable user interfaces; Microsoft has Seadragon: 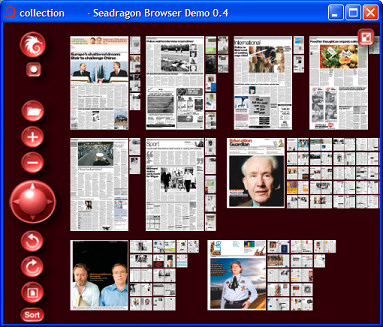 You can experience the Seadragon technology in Photosynth, which is also being ported to Microsoft's Silverlight. According to Microsoft, zoomable UI has these advantages:

Zooming user interfaces are rare in current operating systems and applications, but there are a few. You're probably already using at least one zoomable user interface without thinking much about it.

What really struck me about zoomable UI is how intuitive and usable it is in the right situation. The zooming metaphor is central to the new real-time strategy game Supreme Commander; you're constantly zooming into the battle to take control of individual units, then zooming back out to get a larger, strategic view of what's happening on the battlefield. It's totally natural and completely intuitive. You don't have to think; it just works the way you'd expect it to.

I'm not sure when the mouse scroll wheel became standard equipment on computer mice, exactly, but I'm awfully glad that it did. Zooming is a natural metaphor that people adapt to as easily as they do to scrolling. Zoomable UI is woefully underused today, but I think it should be an integral part of our desktop operating systems in the future.

This Site May Harm Your Computer

Giving Up on Microsoft