I've never been comfortable with mouse gestures in any of these games. It seems like a great idea in concept, but it breaks down in execution, at least for me. I distinctly remember the awkwardness of getting my squads to face the right direction in Myth. And although there was a certain element of mysticism in scrawling spells on the screen in Black and White, the game sometimes had difficulty recognizing what I had drawn. It ultimately ended up feeling like extra work when I could have simply clicked an icon or pressed a key to cast the very same spell. Perhaps problems like these are why mouse gesture control mode is not the default control mode in Darwinia.

Games tend to be experimental when it comes to UI. But mouse gestures are slowly-- very slowly-- making their way into mainstream operating systems and applications:

Even without any of this software installed, you can use one very familiar mouse gesture: dragging and dropping.

I've experimented with several of the above utilities at various times, and I'm still ambivalent about mouse gestures for a few reasons:

In short, gestures are for extremely advanced users only, perhaps even more so than traditional keyboard shortcuts. But they do have some specific uses that are interesting:

"The motion of performing a gesture is more natural than sliding the mouse over to a button or menu," he said. "And because it works anywhere in the window (not just on the button), it saves a bit of time and effort, especially as screens get bigger and you have to move farther to reach a button."

Rather than mousing over and clicking on the relatively small minimize, maximize, or close buttons, it's faster to invoke a gesture right where your mouse is to perform the same action. This is particularly nice when the gesture has some conceptual mapping to the activity: drawing a diagonal slash to close, down to minimize, up to maximize/restore, etcetera. 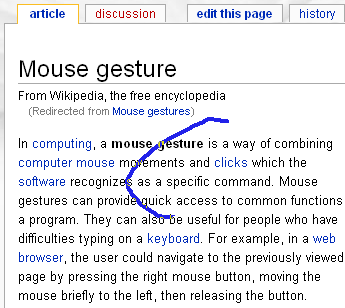 For mouse gestures to become mainstream, they need to be simple, discoverable, and most definitely system-wide.