A little over a year ago, I documented what was on my keychain. Here's what I have today: 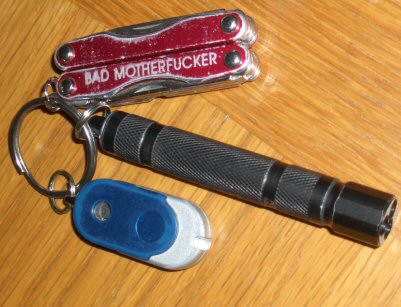 If you're troubled by what appears to be profanity on the Leatherman Squirt, I'll refer you to my previous post-- it's a Pulp Fiction joke. This amazing little pocket knife is the only item that I haven't changed since 2005. I use it all the time, mostly for its scissors, screwdriver, or knife functionality (in that order). It sure does come in handy-- bricolage in action!

USB flash drives are a dime a dozen these days. It's the new floppy disk. This particular flash drive is a 1 gigabyte Iomega Micro Mini. It's by far my favorite USB flash drive model, for two key reasons:

So many USB flash drives have end caps that aren't physically attached to the drive. The first thing I do is lose them! The Mini's design cleverly solves this problem. There's even a little cutout so you can see the drive activity LED with the cap rotated.

The ARC LED AAA battery flashlight I used to carry sadly died. And the company that made it isn't around any more. But the replacement is even better-- the Peak LED Matterhorn. Here's why:

It is a wee bit longer, but otherwise it's a much welcomed improvement over the ARC. I stuck with the basic black keychain model, but there are a variety of styles to choose from.

The one item I wish I had on my keychain is a pen. I haven't been able to find anything appropriately compact and portable. Dan carries a space pen, but I need something that'll attach to a keyring.

I should mention that I do, in fact, carry keys on my keychain as well. I just removed them in the photo to highlight the important stuff.

So what's on your keychain?

update: Here's my 2008 edition of the keychain.