I'm a little embarrassed to admit how much I like the Surface RT. I wasn't expecting a lot when I ordered it, but after a day of use, I realized this was more than Yet Another Gadget. It might represent a brave new world of laptop design. How can you not love a laptop that lets you touch Zardoz to unlock it? 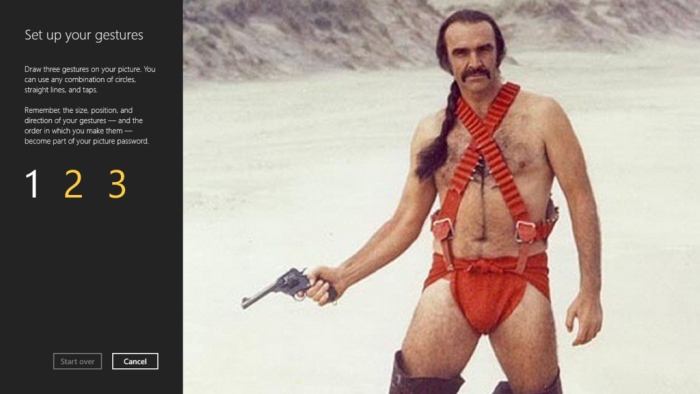 I have an ultrabook I like, but the more I used the Surface, the more obsolete it seemed, because I couldn't touch anything on the screen. I found touch interactions on Surface highly complementary to the keyboard. Way more than I would have ever believed, because I lived through the terror that was Pen Computing. If you need precision, you switch to the mouse or touchpad – but given the increasing prevalence of touch-friendly app and web design, that's not as often as you'd think. Tablets are selling like hotcakes, and every day the world becomes a more touch friendly place, with simpler apps that more people can understand and use on basic tablets. This a good thing. But this also means it is only a matter of time before all laptops must be touch laptops.

I've become quite obsessed enamored with this touch laptop concept. I've used the Surface a lot since then. I own two, including the touch and type covers. I also impulsively splurged on a Lenovo Yoga 13, which is a more traditional laptop form factor. 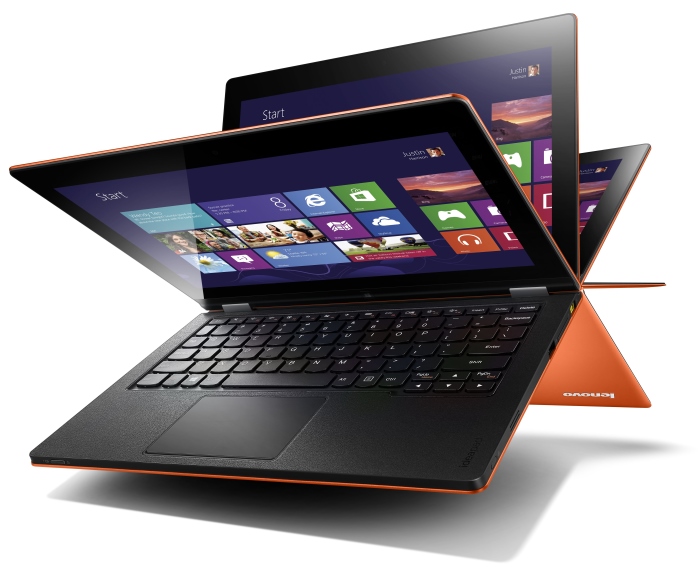 One of the primary criticisms of the Surface RT is that, since it is an ARM based Tegra 3 device, it does not run traditional x86 apps. That's likely also why it comes with a bundled version of Office 2013. Well, the Yoga 13 resolves that complaint, because it's a Core i5 Ivy Bridge machine. But there is a cost for this x86 compatibility:

The size comparison isn't entirely fair, since the Yoga is a 13.3" device, and the Surface is a 10.6" device. But Surface Pro has x86 internals and is otherwise as identical to the Surface RT as Microsoft could possibly make it, and it's still 44% larger and 33% heavier. Intel inside comes at a hefty cost in weight, battery life, and size.

You do get something for that price, though: compatibility with the vast library of x86 apps, and speed. The Yoga 13 is absurdly fast by tablet standards. Its Sunspider score is approximately 150 ms, compared to my iPad 4 at 738 ms, and the Surface RT at 1036 ms. Five hours of battery life might not seem like such a bad tradeoff for six times the performance.

I like the Yoga 13 a lot, and it is getting deservedly good reviews. Some reviewers think it's the best Windows 8 laptop available right now. It is a fine replacement for my ultrabook, and as long as you fix the brain-damaged default drive partitioning, scrape off the handful of stickers on it, and uninstall the few pre-installed craplets, it is eminently recommendable. You can also easily upgrade it from 4 GB to 8 GB of RAM for about $40.

But there were things about the practical use of a touch laptop, subtle things that hadn't even occurred to me until I tried to sit down and use one for a few hours, that made me pause:

To appreciate just how extreme portrait mode is on a widescreen tablet, experience it yourself:

This isn't specific to touch laptops; it's a concern for all widescreen devices. I have the same problem with the taller iPhone 5. Because I now have to choose between super wide or super tall, it is a less flexible device in practice.

The Yoga 13, if representative of the new wave of Windows 8 laptops, is a clear win even if you have no intention of ever touching your screen:

It's a nice laptop. You could do far worse, and many have. In the end, the Yoga 13 is just a nice laptop with a touchscreen slapped on it. But the more I used the Yoga the more I appreciated the subtle design choices of Surface that make it a far better touch laptop. I kept coming back to how much I enjoyed using the Surface as the platonic ideal of what touch laptops should be.

Yes, it is a bummer that the only currently available Surface is ARM based and does not run any traditional Windows apps. It's easy to look at the x86 performance of the Yoga 13 and assume that Windows on ARM is a cute, temporary throwback to Windows NT on Alpha or MIPS which will never last, and understandably so. Do you see anyone running Windows on Alpha or MIPS CPUs today? But I'm mightily impressed with the Tegra 3 SOC (system-on-a-chip) that runs both the Surface RT and the Nexus 7. Upcoming Tegra releases, all named after superheroes, promise 75 times the performance of Tegra 2 by 2014. I can't quite determine how much faster Tegra 3 was than Tegra 2, but even if it is "only" ten times faster by 2014, that's … amazing.

I think we're beginning to uncover the edges of a world where lack of x86 compatibility is no longer the kiss of death it used to be. It's unclear to me that Intel can ever reach equivalent performance per watt with ARM; Intel's ultra-low-end Celeron 847 is twice as fast as the ARM A15, but it's also 17 watts TDP. In a land of ARM chips that pull an absolute maximum of 4 watts at peak, slapping Intel Inside will instantly double the size and weight of your device – or halve its battery life, your choice. Intel's been trying to turn the battleship, but with very limited success so far. Haswell, the successor to the Ivy Bridge CPUs in the Surface Pro and Yoga 13, only gets to 10 watts at idle. And Intel's long neglected Atom line, thanks to years of institutional crippling to avoid cannibalizing Pentium sales, is poorly positioned to compete with ARM today.

Still, I would not blame anyone for waiting on the Surface Pro. A high performance, HD touch laptop in the Surface form factor that runs every x86 app you can throw at it is a potent combination … even if it is 44% larger and 33% heavier.

For a Bit of Colored Ribbon