I noticed something strange in a Windows ME screenshot embedded in a Joel Spolsky article I linked yesterday:

Notice the Qantas icons? Those are shortcuts to a now-defunct unix machine at Joel's company, Fog Creek Software. You can find evidence of it at the bottom of this forum post (search for qantas). It's also shown in some of the screenshots that depict command line interfaces in Joel's UI book.

So Qantas is an Australian airline company, and the name of a UNIX machine. That's when it clicked: the whole thing is a pun on a Raymond Babbitt, aka Rain Man, quote: 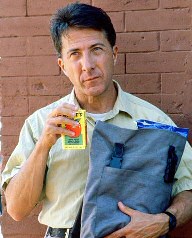 Charlie: Ray, all airlines have crashed at one time or another, that doesn't mean that they are not safe.

Charlie: Oh that's gonna do me a lot of good because QANTAS doesn't fly to Los Angeles out of Cincinnati, you have to get to Melbourne! Melbourne, Australia in order to get the plane that flies to Los Angeles!

Even if I don't always agree with him, the guy has got to be fun to work with.

The Problem With Configurability