The first video game to introduce a high score table was Asteroids, and after that they were a key fixture in virtually every arcade game from the 80's and 90's. One of my favorite high score tables was in Gaplus, the little known sequel to the mega-popular Galaga, which was itself the sequel to Galaxian.

I thought the inclusion of blood type in the high score table for Gaplus was a clever commentary on the meaninglessness of high score tables by the game's developers. As it turns out, it's just a Japanese eccentricity:

If this is a Japanese game, this would make some sense. In Japan, blood type is matched with personality, much like horoscopes here in the US. It's not uncommon to see blood type given for different characters in a game or comic, along with sex, age, etc. It's an important vital statistic that gives more insight to a person!

We may not play arcade games any more, but we still have our high score tables.

Technorati maintains a ranking of the top 100 blogs based on their Technorati Rank:

We also have traffic metrics, which is what Alexa's top 100 websites is based on: 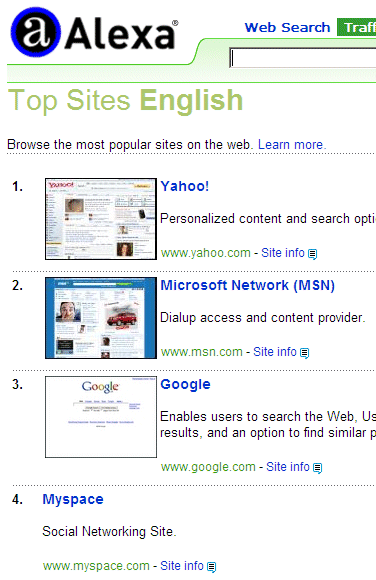 And of course, there's the most wizardly of all high scores, Google's PageRank:

What did you write five years ago?