After years of resistance, I finally buckled. I ordered a 3-way MAME cocktail arcade kit: 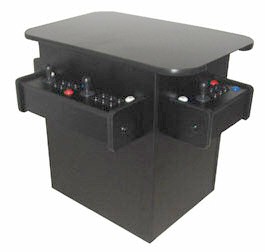 Over the last few years, the homebrew arcade market has spawned a number of businesses specializing in prefab cabinets-- think IKEA meets MAME. They ship you the cabinet in a large box, and you assemble it with a screwdriver and install standard PC monitors and components inside.

Most people choose full-size upright cabinets, such as this SlikStik kit, a familiar arcade format. They also sell the controllers seperately, which come in a staggering array of 1, 2, and even 4 player versions with dual joysticks, trackballs, and spinners:

Cocktail cabinets are more space effective, but have some peculiarities. The classic cabinet is head-to-head, so it can only play games in vertical orientation. The screen "flips" for each player's turn. That's a serious limitation, since many arcade games are designed to be played horizontally. The kit I ordered is the best of both worlds, with controls for both vertical (head to head) and horizontal games (side by side). There are comprehensive reviews of the side-by-side cabinet and the head-to-head cabinet at RetroBlast. If I had the space, I'd choose a traditional upright arcade cabinet. In the meantime, the cocktail is a better choice for me; it takes up less space, can roll on casters, and, if necessary, can be covered with a tablecloth.

I'm looking forward to the kit arriving. I do have a few minor modifications planned, such as mounting speakers on the outside of the cabinet, installing a real arcade coin door on the side, and some LED lighting. You're never too old to finally realize that childhood dream: to be the kid who owns his own arcade game!

* Hmm, how about a MAME coffee table project?

There Ain't No Such Thing as Plain Text