Remember when anything you could possibly imagine could be controlled with a single stick and a single button? Trace the evolution of human interaction in video gaming from 1980 to the present through this remarkable visual game controller family tree. 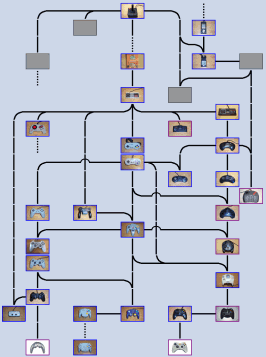 This tree isn't quite as complete as I would like (where is the Odyssey2, for example), but it's got the major players. I had half forgotten how weird the controllers with keypads were, and that the Atari Jaguar was the last console to adopt this oddball convention. Input conventions have certainly changed a lot over the last 20 years; the most profound change-- single digital axis to dual analog axes-- was prompted by the broad switch from 2D to 3D games around 1997.

If you're feeling particularly retro, you can pick up a modern USB incarnation of the no-frills Atari 2600 joystick that started it all for a mere five bucks.