Return to the Planet of Managed Code Bloat

I just updated my post The Bloated World of Managed Code with baseline memory footprints for Console and Winforms apps in .NET 2.0.

I'll admit I am a bit of a hypocrite when it comes to managed code apps. Now that tiny, native BitTorrent clients are available such as uTorrent and BitComet, I just can't force myself to suffer through the Java (Azeureus) and Python (ABC) clients. They're nice enough, but I want small, clean and fast for this kind of app. And where's the .NET BitTorrent client, anyway?

Managed code can be plenty fast, but I've always said that managed code isn't appropriate for every kind of application. It's another tool in your toolbox, but not the only one.

One particularly egregious example of managed code misuse, however, is in ATI's Catalyst video card drivers. The "control center" is a client app which allows you to manipulate the settings. It's written in .NET 1.1 and launched via a button in the graphics driver tab. 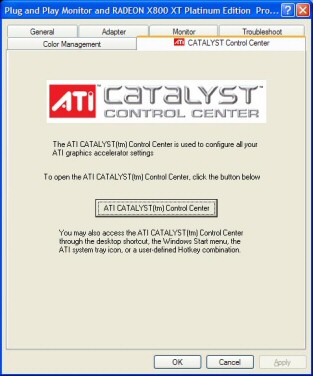 It's a reasonable concept, but in practice-- it sucks. Even on a clean Pentium 4 3.2 machine with 1gb of RAM, loading the control center for the first time feels like almost a full minute of waiting for something to happen. As commenters on Junfeng Zhang's log point out, this is likely due more to poor coding than anything else. But what really irks me is that all I want to do is adjust a few minor video card settings. Is it really appropriate to have such a heavyweight app for such a simple task?

Managed code is great. But a world where everything is managed code-- including the operating system and essential utilities-- is still pretty far off.