In multiple monitors and productivity, I proposed three LCD panels as the standard developer desktop configuration. The only thing holding us back was price, and the minor inconvenience of obtaining a second video card to drive the third monitor.

I recently upgraded my home system to match my work configuration. I purchased two of these Rosewill R910 19" panels, and they live up to all the positive user reviews: they're dirt cheap and offer excellent image quality. 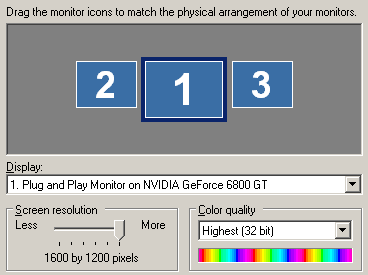 I distinctly remember paying around $1000 for a 19" CRT in 1998, and another $900 for a 21" CRT in 2000. For about the same price, I can now get three times the display area, less total power consumption, and crisper image quality in 2D applications. Now that's progress! In my opinion, price is no longer a valid reason to choose a less-productive single monitor configuration.

Sure, you could buy a larger single panel, such as this 1920x1200 Dell model, priced at a reasonable $1,200. But is that really any match for the effective 3840x1024 you'd get with three 19" Rosewill panels for $200 less? Buying large LCDs rarely makes sense because of the exponential increase in price as the size goes up. There's always a price/performance sweet spot, and right now the sweet spot is unquestionably the 19" LCD panels. Another reason to avoid extremely high resolution single displays: Windows is trapped in a bitmapped world. The pitiful, wonky "Large Fonts" mode just isn't cutting it. Until Avalon arrives, with its perfectly scalable PDF-style vector display engine, I can't recommend suffering through traditional win32 apps on a 1920x1440 display.

Now, if you are making the leap to a third panel, some things to consider:

I'm increasingly certain that, sometime in the next few years, two LCD panels will be a standard configuration for not just developers and power users, but a sizable percentage of mainstream Dell systems. Why? Well, the same reason that all CPUs will eventually be multi-core-- sometimes there's nowhere to go but sideways.

Is your PC boring?