Steve Olson contacted me a few weeks ago after he saw my post on ergonomic computing. Steve works for Ergotron, and offered to comp me some monitor arms.

Usually when I get offered free items related to my blog, I politely decline. I don't want a conflict of interest, and frankly most of the time what I am offered doesn't appeal to me anyway. But as a long time triple monitor enthusiast, I've been pondering the idea of using LCD monitor arms for a few months now, and Ergotron is a model I've seen recommended a bunch of places. So I accepted Steve's offer. Take this as a disclaimer; I was provided these monitor arms gratis, so my opinion may be biased.

Initially I was interested in their triple monitor mount, but Steve waved me away from that and recommended three Ergotron LX Desk Mount LCD Arms instead. I figured he's the expert, so I followed his advice. 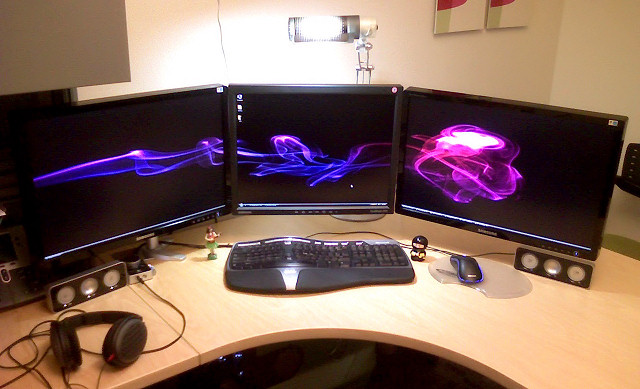 The arms free up a ton of space under the monitors. With the large base of the 245BW, I couldn't put my mouse where I wanted to. Now I can.

All LCDs have a standard VESA mounting plate in the rear, which the arms are designed to slot into like lego bricks. Installing the arms is a simple matter of unbolting the default base from your LCD monitor, and bolting the monitor to the arm. However, be careful – there is more than one VESA mounting plate standard, and larger monitors require larger plates. Ergotron provides a display compatibility page where you can check to see what you'll need. The 100 x 100 mm VESA mounting panel is very common, but if your monitor is 22" or larger you might have something bigger, as I did on my 24"s. 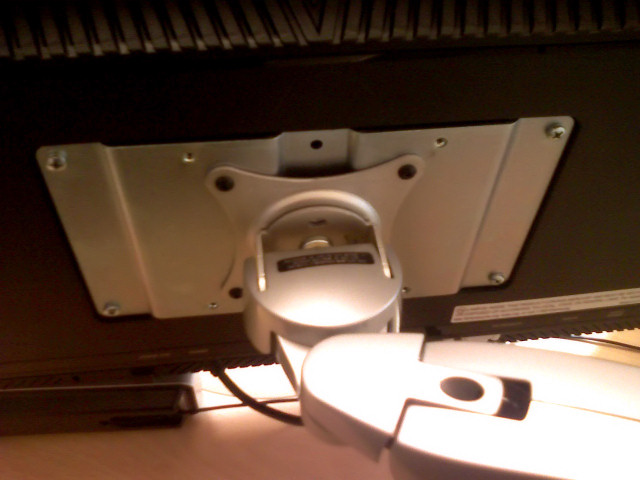 Before I set the monitor arms up, I had them sitting on my desk for test purposes, and they were quite the conversation pieces. People kept stopping by my office to check them out and ask what they were, and how they worked. 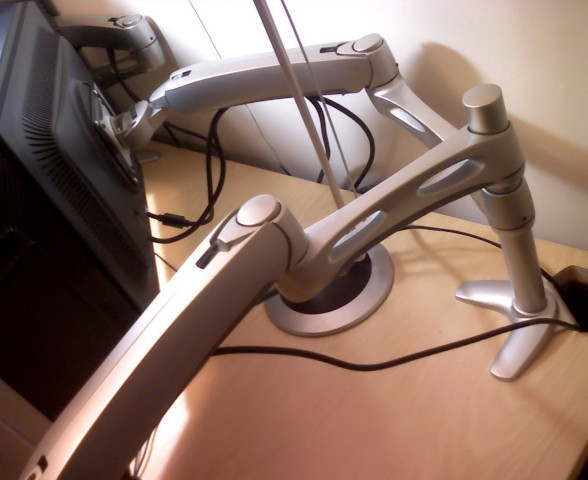 As you can see, I have a 2x1 and 1x1 configuration, two bases with three arms. The base clamps against the bottom of the desk, so you'll need an unobstructed edge to attach them to. We found the best results came from clamping both bases through the holes cut in the desk for cable routing. These holes were never obstructed and offered the best positioning options. There's a clever little integrated cable conduit built into the underside of the larger part of the arm, so the cables don't droop behind the monitor. 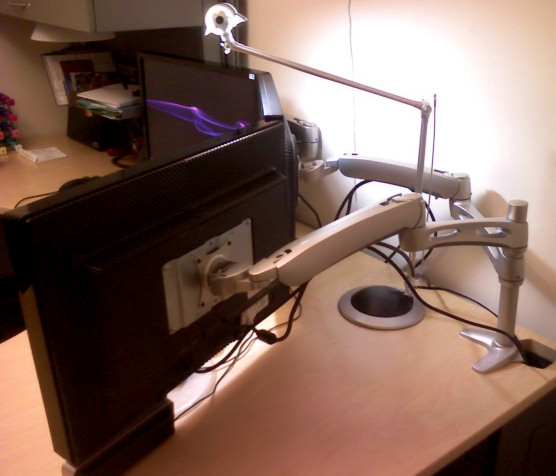 The Ergotron LX monitor arms have exceeded my expectations. They …

The arms are counterweighted and spring tensioned; once you adjust the tension screws for the monitor, you can (almost) effortlessly rotate, angle, and move the LCDs horizontally or vertically within the range of the arm. Turning a monitor to demo something, and then slotting it back into place when I'm done, is no problem.

When I initially considered monitor arms, I decided it was a better investment to upgrade one of my monitors than it was to buy three monitor arms that I may or may not like. Now that I've used these arms for a few days, I like them so much I'm considering buying a set for myself to use at home. Yes, with my own money. Amazon carries the Ergotron LX in black and silver for about $115. You can even use these arms to hold your laptop.

Fancy monitor arms are by no means required. The stock LCD monitor bases included by the manufacturers work just fine. But if you're willing to invest a bit and customize your setup, I think the payoff – in terms of flexibility, looks, and convenience – is well worth it.