I happened upon Russ Walter's Secret Guide to Computers around 1993. By then it was already up to the 18th edition. 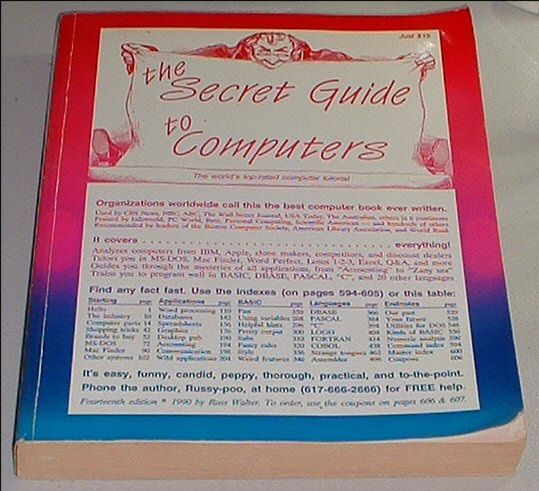 The first version of The Secret Guide was published in 1972 as a self-typed 17 page pamphlet. The latest edition is a hulking 607-page monster, a rambling, zine-like love letter to the computer, in all its manifestations and permutations.

Computers are like drugs: you begin by spending just a little on them but soon get so excited by the experience -- and so hooked -- that you wind up spending more and more to feed your habit.

Your first computer experience seems innocent: you spend just a little money for a cute little computer. You turn the computer on, tell it to play a game, and suddenly the computer's screen shows dazzling superhuman colors that swirl hypnotically before you. You say "Wow, look at all those colors!" and feel a supernatural high.

But after two months of freaking out with your new computer, the high wears off and you wonder, "What can I buy that's new, exciting, and gives me an even bigger high?" So you buy more stuff to attach to your computer. Now you're in really deep, financially and spiritually. You're hooked. You've become addicted to computers. Each month you return to your favorite computer store to search for an even bigger high -- and spend more money.

Look at me. I'm a typical computer junkie. I've already bought 50 computers, and I'm still going. Somebody help me! My computers have taken over my home. Whenever I try to go to sleep, I see those computers staring at me, their lights winking, tempting me to spend a few more hours in naughty fun, even if the sun's already beginning to rise.

The computer will fascinate you. It'll seduce you to spend more time with it. You'll fall in love with it. You'll start buying it presents: exotic foods (expensive programs to munch on), new clothes (a pretty little cloth cover to keep dust off), and expensive jewels (a printer and extra disks).

The computer's a demanding lover. You'll feel married to it.

Marrying a computer is much groovier than marrying a person: computers are good at "getting it on" (they make you feel all electric and tingly) and they never argue (they're always ready to "do it", except when they "have a headache").

I wanted to call this book "The Sexual Guide to Computers" and put a photo of my computer wife and me on the cover; but some communities still prohibit mixed marriages. That cover would be banned in Boston, which is where I've lived. So I had to play cool and say "Secret" Guide to Computers. But here's the real secret: this book's about sex.

If you marry a computer but already married a human, your human spouse will call you a "bigamist" and feel jealous of the computer. Your marriage to that human can deteriorate and end in divorce.

Although it's primarily targeted at novices, I distinctly remember one long winter weekend in 1993 reading the entire Secret Guide cover to cover. Walter's enthusiasm rings through on every page. His no-nonsense, no-budget D.I.Y. ethos outshines any number of polished, soulless commercial books.

Russ is an interesting guy; there's a tiny biography of him in the "about the author" section of this book review. He also has the audacity to publish his phone number in the book, and encourage people to call him, any time, 24 hours a day, with only a few strings attached. His book is completely self-published under a "copywrong" license. And evidently he means it: he offers a CD-ROM version with the unabridged text of the book in various formats, and semi-authorized versions of the text are available all over the web. One of them even has a higher pagerank than his own site, which is unfortunate.

For more enthusiasm that borders on insanity, Russ offers samples of his books online. You can read 24 chapters of the latest edition of the Secret Guide, as well as 24 chapters of the companion book, Tricky Living. I long ago gave away my copy of The Secret Guide, but Russ is exactly the kind of guy I love to support, so I'll be buying new copies.

I also own Charles Petzold's book, Code. It's another love letter to the computer. 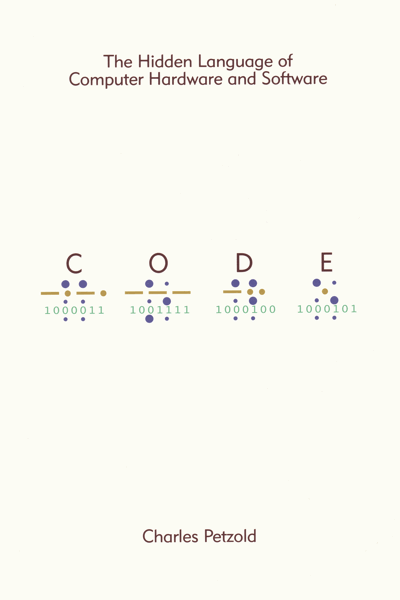 Instead of a long, rambling love letter, Code is a collection of elegantly written sonnets. It has an austere layout, filled with beautiful diagrams. It gently guides you through the history of the computer, at the lowest and most fundamental levels, from Babbage to modern times. But it's no less urgent in its affections.

Code is at the absolute opposite end of the spectrum from The Secret Guide. There probably aren't two more different books on the planet. But if you think Charles Petzold's any less dedicated than Russ Walter, consider this: which one has a Windows tattoo? And which one wears a witch's hat and red kimono over a monk's habit and roller skates to computer fairs? Well, sometimes love makes you do crazy things.

I'm with Petzold and Walter. If loving computers is wrong, I don't want to be right.

Keeping Time on the PC