How big is your Lap, Anyway?

Laptop magazine's Attack of the 20-inch Notebook is a tongue-in-cheek look at using the Dell XPS M2010 as a portable system in a few different locations. 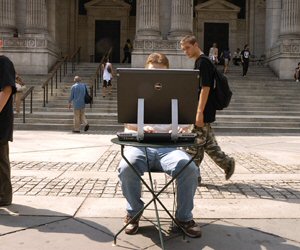 Hilarity ensued. For context, here are the relevant specs of this semi-portable concept system:

Shades of the original 28 pound Compaq Portable, although the 9" text-mode monochrome monitor and 4.77MHz 8088 aren't nearly as impressive.

Although the XPS M2010 is an extreme case, I never quite understood the fascination of those giant 10+ pound desktop replacement laptops. You can even buy batteryless laptops that must be plugged in -- so-called "Mobile PCs". Isn't portability the whole point of a notebook computer?

I adored my three pound Dell Inspiron 300; travelling with it was effortless. I compromised a bit for maximum Vista performance with my 5.5 pound Asus W3J, which is a great machine, but at nearly double the weight it's also a more noticeable burden. That's absolutely as large as I'm willing to go for a laptop. I'd much rather be using an ultraportable like the 2.2 pound Samsung Q2010 or the 3 pound Dell D420.