As we begin the private beta for Stack Overflow later this week, I wondered: where do the software terms alpha and beta come from? And why don't we ever use gamma?

Alpha and Beta are the first two characters of the Greek alphabet. Presumably these characters were chosen because they refer to the first and second rounds of software testing, respectively.

But where did these terms originate? There's an uncited Wikipedia section that claims the alpha and beta monikers came, as did so many other things, from the golden days of IBM:

The term beta test comes from an IBM hardware product test convention, dating back to punched card tabulating and sorting machines. Hardware first went through an alpha test for preliminary functionality and small scale manufacturing feasibility. Then came a beta test, by people or groups other than the developers, to verify that the hardware correctly performed the functions it was supposed to, and that it could be manufactured at scales necessary for the market. And finally, a c test to verify final safety. With the advent of programmable computers and the first shareable software programs, IBM used the same terminology for testing software. As other companies began developing software for their own use, and for distribution to others, the terminology stuck -- and is now part of our common vocabulary.

Based on the software release lifecycle page, and my personal experience, here's how I'd characterize each phase of software development:

These phases all sound perfectly familiar to me, although there are two clear trends:

In the brave new world of web 2.0, the alpha and beta designations don't mean quite the same things they used to. Perhaps the most troubling trend is the perpetual beta. So many websites stay in perpetual beta, it's almost become a running joke. GMail, for example, is still in beta after over four years!

Although I've seen plenty of release candidates in my day, I've rarely seen a "gamma" or "delta". Apparently Flickr used it for a while in their logo, after heroically soldiering on from beta: 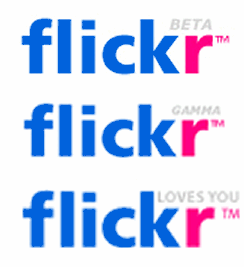 "loves you" is certainly more fun than "gold", but I'm not sure it's ever the same as done. Maybe that's the way it should be.